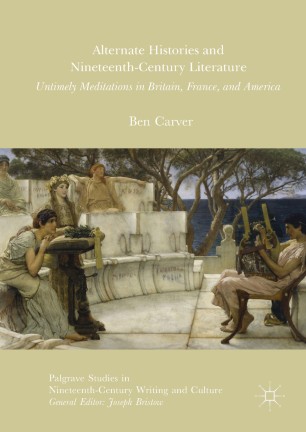 ‘In a stimulating text rich with “alternate facts”, Carver reminds us that history is also what failed to happen and that each historical present carries with it its fantasies of alternate realities.  The counterfactual has become a banality today, but this stimulating history of plural virtualities demonstrates how poetic our prosaic 19th century was in fact, and how productively it confronted its own unrealized possibilities.’ — Fredric Jameson, Knut Schmidt-Nielsen Professor of Comparative Literature, Duke University, USA

'Ben Carver has produced a rich, wide-ranging and imaginative study of a neglected genre that has much to teach us about the nineteenth century and its characteristic modes of narrating the past, present and future. This is, in short, a valuable alternate history of Victorian historiography, as well as an original contribution to our understanding of the utopian imagination.' — Matthew Beaumont, Professor of English Literature, University College London, UK

style="color: rgb(0, 0, 0); font-size: 12px;">This book provides the first thematic survey and analysis of nineteenth-century writing that imagined outcomes that history might have produced. Narratives of possible worlds and scenarios—referred to here as “alternate histories”—proliferated during the nineteenth century and clustered around pressing themes and emergent disciplines of knowledge. This study examines accounts of undefeated Napoleons after Waterloo, alternative genealogies of western civilization from antiquity to the (nineteenth-century) present day, the imagination of variant histories on other worlds, lost-world fictions that “discovered” improved relations between men and women, and the use of alternate history in America to reconceive the relationship between the New World and the Old. The “untimely” imagination of other histories interrogated the impact of new techniques of knowledge on the nature of history itself. This book sheds light on the history of speculative thought, and the relationship between literature and the history of ideas in the nineteenth century.

Ben Carver is Associate Lecturer in English at Falmouth University, UK. He was awarded his doctorate from the University of Exeter in 2013 and since then has been teaching and researching nineteenth-century literature and culture. He is now studying the circulation of conspiracy beliefs and narratives, which is part of the COST-funded “Comparative Analysis of Conspiracy Theories” project.

“It communicates a great deal more about the shape and texture of the nineteenth-century intellectual and literary landscape. It is an intelligent and admirably comprehensive study that is sure to find an appreciative audience among scholars in and around the humanities. It will be a special treat for sf fans eager to learn about the complex conditions out of which the genre arose.” (Stephen Dougherty, Science Fiction Studies, Vol. 46, 2019)