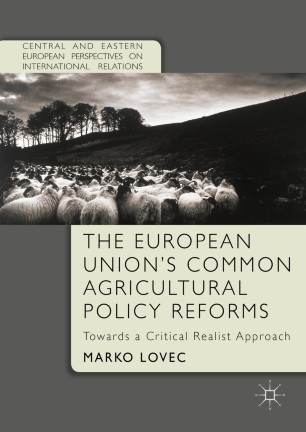 Towards a Critical Realist Approach

This book engages in the controversies of the European Union’s Common Agricultural Policy (CAP) reforms, demonstrating how these are reiterated by mainstream theoretical approaches in the field.

The reforms that the European Union’s CAP underwent during the last three decades were intended to make it less trade-distorting, more taxpayer-friendly and more able to meet the new challenges of environmental concerns and rural development/territorial cohesion. The outcome of the reforms has, however, contradicted these objectives, with the controversies being reiterated by the mainstream theoretical approaches in the field.

European Union’s Common Agricultural Policy Reforms argues that these controversies are due to reductionist, rationalist and idealist assumptions with regard to the object of inquiry applied by mainstream approaches. It proposes an alternative critical approach that takes into account the role of real material factors. Critical realism is not just an alternative explanation of CAP reforms but an alternative theory of how explanations can be made, which enables readers to reflect upon and endorse the results of existing lines of research in proceeding towards deeper level theory.

Marko Lovec is a Research fellow and Assistant Professor at the Faculty of Social Sciences, University of Ljubljana, Slovenia. He specializes in international political economy and European integration, with European Union’s Common Agricultural Policy being his main topic of research.

“The stated purpose of this book was to test three alternative approaches to explaining and understanding these reforms. … the book is an interesting read and provides the reader with a useful overview of the development of the CAP. At the same time it is thought provoking because it challenges the reader to consider their own approach to science and their understanding of how knowledge is generated.” (Alan Renwick, EuropeNow, europenowjournal.org, November, 2017)
Buy options