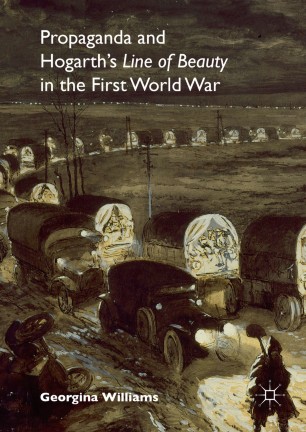 Propaganda and Hogarth's Line of Beauty in the First World War

Propaganda and Hogarth’s ‘Line of Beauty’ in the First World War assesses the literal and metaphoric connotations of movement in William Hogarth’s eighteenth-century theory of a ‘line of beauty’, and subsequently employs it as a mechanism by which the visual propaganda of this era can be innovatively explored. Hogarth’s belief that this line epitomises not only movement, but movement at its most beautiful, creates conditions of possibility whereby the construct can be elevated from traditional analyses and consequently utilised to examine movement in artworks from both literal and metaphorical perspectives. Propagandist promotion of an alternate reality as a challenge to a current ‘real’ lends itself to these dual viewpoints; the early years of the twentieth century saw growth in the advertising of conflict via the pictorial poster, instigating intentionally or otherwise an aesthetic response from soldier-artists embroiled on the battlefields. The ‘line of beauty’ therefore serves as a productive mechanism by which this era of propaganda art can be appraised.

Georgina Williams is a writer and artist. Georgina has exhibited paintings and photography, and is currently working on a continuing photographic project entitled Industrialia.