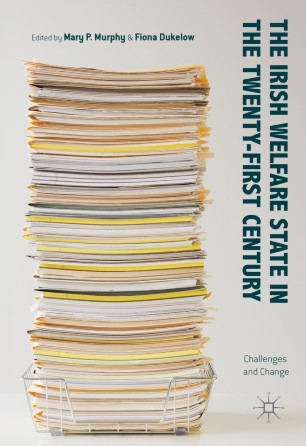 The Irish Welfare State in the Twenty-First Century

‘In an age of uncertainty, this book represents an important contribution to debate on the futures of welfare states. Incorporating detailed investigation of less visible concerns of social policy alongside more traditional analytical territory, it provides both a source of reference, chronicling welfare state change in Ireland, and readable, scholarly accounts of that change.’ -  Zoë Irving, University of York, UK

This book provides a critical and theoretically-informed assessment of the nature and types of structural change occurring in the Irish welfare state in the context of the 2008 economic crisis. Its overarching framework for conceptualising and analysing welfare state change and its political, economic and social implications is based around four crucial questions, namely what welfare is for, who delivers welfare, who pays for welfare, and who benefits.  Over the course of ten chapters, the authors examine the answers as they relate to social protection, labour market activation, pensions, finance, water, early child education and care, health, housing and corporate welfare.  They also innovatively address the impact of crisis on the welfare state in Northern Ireland. The result is to isolate key drivers of structural welfare reform, and assess how globalisation, financialisation, neo-liberalisation, privatisation, marketisation and new public management have deepened and diversified their impact on the post-crisis Irish welfare state. This in-depth analysis will appeal to sociologists, economists, political scientists and welfare state practitioners interested in the Irish welfare state and more generally in the analysis of welfare state change.

Mary P. Murphy is Lecturer in Irish Politics and Society at Maynooth University, Ireland
Fiona Dukelow is a Lecturer in the Department of Applied Social Studies, University College Cork, Ireland

Mary P. Murphy is Lecturer in Irish Politics and Society at Maynooth University, Ireland
Fiona Dukelow is a Lecturer in the Department of Applied Social Studies, University College Cork, Ireland