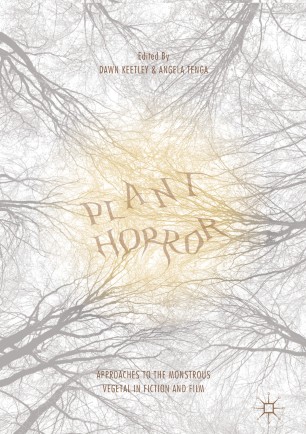 Approaches to the Monstrous Vegetal in Fiction and Film

This collection explores artistic representations of vegetal life that imperil human life, voicing anxieties about our relationship to other life forms with which we share the earth. From medieval manuscript illustrations to modern works of science fiction and horror, plants that manifest monstrous agency defy human control, challenge anthropocentric perception, and exact a violent vengeance for our blind and exploitative practices. Plant Horror explores how depictions of monster plants reveal concerns about the viability of our prevailing belief systems and dominant ideologies— as well as a deep-seated fear about human vulnerability in an era of deepening ecological crisis. Films discussed include The Day of the Triffids, Invasion of the Body Snatchers, The Wicker Man, Swamp Thing, and The Happening.

Dawn Keetley teaches at Lehigh University in Bethlehem, Pennsylvania. She has published on several recent horror TV series as well as on horror films from the 1930s to the present. She is the editor of a collection of essays on The Walking Dead (2014) and is finishing a book on 19th century Boston murderer, Jesse Pomeroy, as well as a co-edited collection on the ecogothic in 19th century America.
Angela Tenga currently teaches courses in literature, history, and popular culture at Florida Institute of Technology. Her research interests include monster studies, representations of crime in fiction, early English literature, and the renewal and revision of the medieval in modern popular culture.
iv>