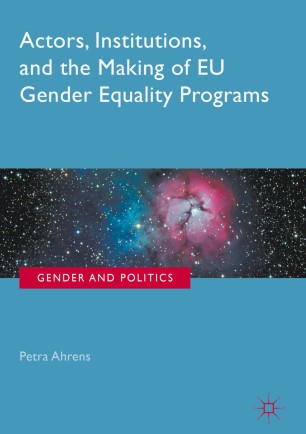 Actors, Institutions, and the Making of EU Gender Equality Programs

This book is an actor-centred sociological study of the EU-level processes that produce gender equality policy. Based on interviews and documentary analysis, the study unpacks the process of the “Roadmap for Equality between Women and Men 2006-2010” to explain the different roles of actors in the making of EU gender equality policies. By analysing policy processes inside institutions and among institutions, the study focuses on the internal working logics in and between EU-level institutions. It highlights the shifting spaces, openings, and constraints for the development of gender equality policies. Concentrating on EU policy programmes helps shed light on the invisible aspects of EU gender equality policy-making and how this process changed regarding actors, structure and content in the late 2000s. This book will be of interest to students and scholars in the fields of EU politics, gender politics, and public policy, as well as to institutional and non-governmental actors in the area of gender politics in Europe and the working of EU politics.

“This book masterfully applies a political sociology approach to account for the retrenchment of EU gender equality policy at the EU level. Through an actor-centered approach, Ahrens illuminates the dynamics of EU policy change and underlines the importance of policy instruments in shaping the power relations among stakeholders in a policy field.” – Professor Virginie Guiraudon, Sciences Po, France

“Ahrens engenders Giddens’ structuration theory and applies it to an analysis of EU gender policy to explain dramatic change. While the EU previously appeared as a progressive gender regime, the unexpected rollback in the fifth phase is characterised by a switch ‘from hard to soft law’ and recently to ‘softened soft law’. By combining sociological with political approaches, Ahrens identifies changing actor behaviour in relation to the ‘Roadmap 2006-2010’. She draws an insightful picture of ‘normalisation’ and ‘de-politicisation’ of EU internal policy-making that is simultaneously most fascinating for EU policy analysts and very sobering for gender activists.” – Professor Gabriele Abels, University of Tübingen, Germany

“Ahrens’ comprehensive text merges sociological and political science approaches to analyse the EU’s 2006-2010 Roadmap for Equality and the changes that this policy brought to the overall structure of gender equality policy in the EU. One of the strengths of the text is the attention that Ahrens pays to the interplay between structures and agents, in which she considers both vertical and horizontal processes, and draws out hidden processes at work in the EU’s gender policy. The findings are important to furthering our understanding of gender equality in the EU and the importance of specific actors in a complex and supranational system.” – Professor Heather MacRae, York University, Canada
Buy options