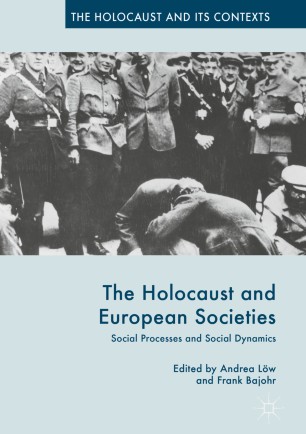 The Holocaust and European Societies

This book explores the Holocaust as a social process. Although the mass murder of European Jews was essentially the result of political-ideological decisions made by the Nazi state leadership, the events of the Holocaust were also part of a social dynamic. All European societies experienced developments that led to the social exclusion, persecution and murder of the continent’s Jews. This volume therefore questions Raul Hilberg´s category of the ‘bystander’. In societies where the political order expects citizens to endorse the exclusion of particular groups in the population, there cannot be any completely uninvolved bystanders. Instead, this book examines the multifarious forms of social action and behaviour connected with the Holocaust. It focuses on institutions and persons, helpers, co-perpetrators, facilitators and spectators, beneficiaries and profiteers, as well as Jewish victims and Jewish organisations trying to cope with the dynamics of exclusion and persecution.

Andrea Löw is Deputy Director of the Center for Holocaust Studies at the Institute of Contemporary History in Munich, Germany.

Frank Bajohr is Director of the Center for Holocaust Studies at the Institute for Contemporary History in Munich, Germany and Professor at Ludwig Maximilians University.