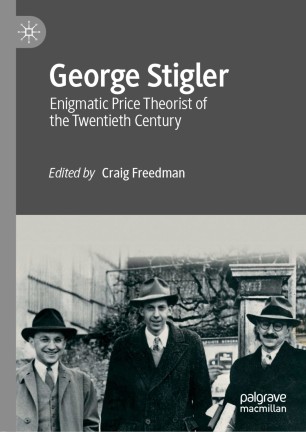 George Stigler (1911-1991) was unquestionably one of the post-war giants of the economics profession. Along with such compatriots as Milton Friedman, Aaron Director, Gary Becker and others at Chicago, he would manage to radically reshape the contours of the discipline, engineering a virtual counter-revolution against the previous post-war consensus. Stigler essentially pioneered the fields of industrial organisation and regulatory economics while contributing landmark studies to the history of economic thought. George Stigler was awarded a much-deserved Nobel Prize in 1982.
At heart always a shy boy from the provinces, defending himself and his beliefs against the demands of a more wicked and devious world, he remained one of the only truly inscrutable figures in the history of modern economics. A kind, deeply caring family man, he fended off those outside his inner circle by employing a razor sharp, and often cruel, wit, keeping friends, colleagues and especially enemies at an arm’s distance. “… [there was] the student who came to George complaining that he didn’t deserve the ‘F’ he’d received in George’s course. George agreed but explained that ‘F’ was the lowest grade the administration allowed him to give.” Many who had the fortune, or misfortune, of coming within the range of his sharp tongue, even in the seeming context of an innocent encounter, would bear the scars of that contact for years to come. “With a paper like this, [delivering it] under the table, would not be inappropriate.”
This volume is then one of the first to shed light on an entirely enigmatic figure by approaching both the man and his work from very divergent and original perspectives. Whether it succeeds is up to the whims of the reader. Or as George Stigler was wont to say, “Let the chips fall where they may.”

Craig Freedman, having failed to succeed as a professional mime or a forensic accountant, in a move reeking of desperation, settled on becoming an academic economist instead. Whether this was an inspired or well-intention decision remains unknown.