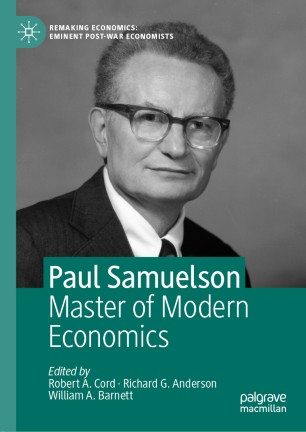 A significant part of economics as we know it today is the outcome of battles that took place in the post-war years between Keynesians and monetarists. In the US, the focus of these battles was often between the neo-Keynesians at the Massachusetts Institute of Technology (MIT) and the Chicago monetarists. The undisputed leader of the MIT Keynesians was Paul A. Samuelson, one of the most influential economists of the 20th century and arguably of all time. Samuelson’s output covered a vast number of subjects within economics, the quality of these
often pioneering contributions unmatched in the modern era.
The volume focuses both on how Samuelson’s work has been developed by others and on how that work fits into subsequent developments in the various fields of speciality within which Samuelson operated.

Robert A. Cord holds a PhD from Cambridge University, UK. His areas of interest include the history of economic thought and, within this, the history of macroeconomics. His publications include Reinterpreting the Keynesian Revolution (2012), (as co-editor) Milton Friedman: Contributions to Economics and Public Policy (2016), The Palgrave Companion to Cambridge Economics and The Palgrave Companion to LSE Economics.
Richard G. Anderson joined the Centre for Economics and the Environment at Lindenwood University as a research fellow in the Summer of 2013 and also teaches economics courses in the School of Business and Entrepreneurship. Prior to joining Lindenwood, he was a vice president and economist at the Federal Reserve Bank of St. Louis.
​William A. Barnett is Director of the Advances in Monetary and Financial Measurement Program at the Center for Financial Stability. The program provides national and international databases of monetary and financial data that are rigorously founded in economic aggregation and index-number theory. Data includes monthly releases and relevant analysis of US money supply.