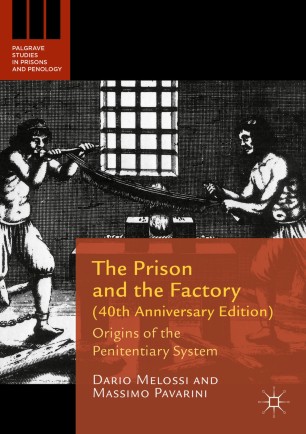 The Prison and the Factory (40th Anniversary Edition)

Origins of the Penitentiary System

This new edition of The Prison and the Factory, a classic work on radical criminology, includes two new, long essays from the authors and a foreword from Professor Jonathan Simon (UC Berkeley). In the two essays, Melossi and Pavarini reflect on the origins, development and fortune of The Prison and the Factory in relation to the debates surrounding mass incarceration that have taken place since this book was first published 40 years ago. The reputation of the original work has long been established worldwide, and this updated version will be of very special interest to scholars of the criminal justice system, penology, and Marxist theory.
This seminal book examines the links between the development of capitalist political economy and changing forms of social control. Melossi and Pavarini analyse the connection between the creation of penal institutions and regimes in Europe and the USA, and the problems generated by the emergence of capitalist soci
al relations. They provide a thorough neo-Marxist view of emergent capitalism and the penal mechanisms which are constructed to deal with the problem of labour.
Contemporary to but independent from the work of Michel Foucault, Melossi and Pavarini combine research on the development of penal philosophies and institutions with a rigorous account of changing forms of capital accumulation, focusing on the use, and the problem, of labour under capitalist relations.

“It is wonderful to see this classic brought back into print. This new volume is especially important because of the two new essays by its authors, which assess their work forty years after it first appeared – placing the work in still broader historical context, and in light of recent scholarly and penalogical developments. Both authors also recount how the volume first came about, and in doing so, shed insight on how so much superb scholarship is produced: through good fortune, insatiable  curiosity, and hard work. I do not mean to diminish the many extraordinary accomplishments of  both Melossi and Pavarini since the publication of this book, but to my mind The Prison and the Factory stands as their crowning achievement. It will be read for the next one hundred years.” (Malcolm Feeley, Claire Sanders Clements Professor, University of California at Berkeley, USA)
Buy options