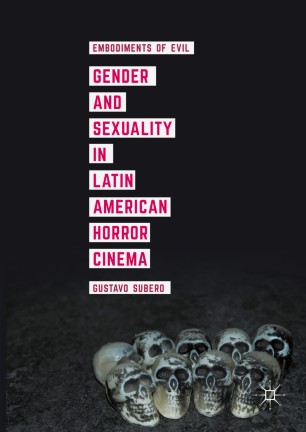 Gender and Sexuality in Latin American Horror Cinema explores the different mechanisms and strategies through which horror films attempt to reinforce or contest gender relations and issues of sexual identity in the continent. The book explores issues of machismo, marianismo, homosociality, bromance, among others through the lens of horror narratives and, especially, it offers an analysis of monstrosity and the figure of the monster as an outlet to play out socio-sexual anxieties in different societies or gender groups. The author looks at a wide rage of films from countries such as Cuba, Peru, Mexico and Argentina and draws points of commonality, as well as comparing essential differences, between the way that horror fictions – considered by many as low-brow cinema - can be effective to delve into the way that sexuality and gender operates and circulates in the popular imaginary in these regions.

Gustavo E. Subero is a researcher in Latin American Cultural Studies at Birkbeck University of London, UK. He has worked in a number of universities across the UK teaching courses on Latin American cultural studies and Hispanic/Global cinema, as well as courses on sex, sexuality and global media and representation(s) to undergraduate and postgraduate students. His main areas of research are queer masculinity in film and visual media, queer authorship, exploitation cinemas, low-brow culture, queer literatures and literatures of the diaspora, representations of health and illness in contemporary culture and the cultural symbolism of seropositivity society.