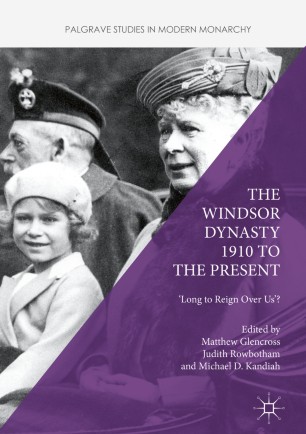 'Long to Reign Over Us'?

This book explores the recreation and subsequent development of the British Monarchy during the twentieth century.  Contributors examine the phenomenon of modern monarchy through an exploration of the establishment and the continuing impact of the Windsor dynasty both within Britain and the wider world, to interrogate the reasons for its survival into the twenty-first century. The successes (and failures) of the dynasty and the implications of these for its long-term survival are assessed from the perspectives of constitutional, political, diplomatic and socio-cultural history. Emphasis is placed on the use of symbols and tradition, and their reinvention, and public reactions to their employment by the Windsors, including the evidence provided by opinion polls. Starting with George V, and including darker times such as the challenge of the abdication of Edward VIII, this collection considers how far this reign was a key transition in how the British royal family has perceived itself and its role through examination of the repackaging for mass consumption via the media of a range of state occasions from coronations to funerals, as well as modernization of its relations with the military.

Matthew Glencross is a Royal and Constitutional historian at the Institute of Contemporary British History at King’s College London, UK. His previous publications include The Royal Tours of Edward VII: Reinventing Royal Diplomacy for the Twentieth Century.

Judith Rowbotham is Visiting Research Professor at Plymouth University, UK and Director and co-founder of SOLON. She has published widely in the areas of law, cultural, social and legal history, including Crime News in Modern Britain, Press Reporting and Responsibility 1820-2010.

Michael D. Kandiah is Director of the Witness Seminar Programme at the Institute of Contemporary British History at King’s College London, UK. He is author of several books on British diplomatic and political history.