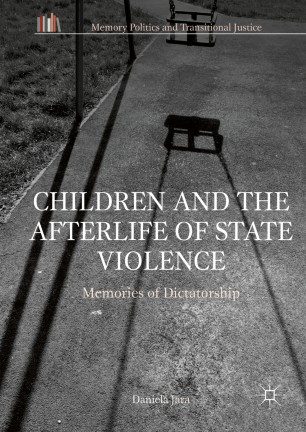 Children and the Afterlife of State Violence

This book examines memories of political violence in Chile after the 1973 coup and a 17-years-long dictatorship. Based on individual and group interviews, it focuses on the second generation children, adults today, born to parents who were opponents of Pinochet´s regime. Focusing on their lived experience, the intersection between private and public realms during Pinochet’s politics of fear regime, and the afterlife of violence in the post-dictatorship, the book is concerned with new dilemmas and perspectives that stem from the intergenerational transmission of political memories. It reflects critically on the role of family memories in the broader field of memory in Chile, demonstrating the dynamics of how later generations appropriate and inhabit their family political legacies. The book suggests how the second generation cultural memory redefines the concept of victimhood and propels society into a broader process of recognition.

“Daniel Jara Leiva's Children and the Afterlife of State Violence is a major contribution to writings in transitional justice but also to the fields of cultural memory and global social theory.  She has listened with sensitivity, insight and attention to the children of the Chilean Dictatorship and illuminated their struggles to live with their traumatic histories and memories. This book strikes chords with those wanting to learn about the impact of traumatic events and how they are embodied across different regions of the world. It will be a book welcomed across across disciplinary boundaries.” (Victor Jeleniewski Seidler, Professor Emeritus in Social Theory, Goldsmiths, University of London, UK)

“Daniela Jara’s book is a beautiful, moving and intimate weaving of young lives under dictatorship, lives forced to understand what could be said and not said in their public and private worlds, to grasp the painful realities of political repression, and to grow up very fast.  In her portrayal, Jara also offers a sophisticated theoretical and multidisciplinary lens into both authoritarianism and its aftermath, as she draws from memory studies, social psychology, cultural criticism, political philosophy and more.  This is both an incisive analytical contribution and a useful choice for social science classrooms.” (Katherine Hite, Frederick Ferris Thompson Chair of Political Science, Vassar College, US)

“The book is a well-written, insightful exploration of memories of political violence in Chile following the 1973 coup and the Pinochet dictatorship. Jara carefully follows the significant literature on the memory of political violence coming out of the Holocaust and more recently in Chile and other parts of the Southern Cone of Latin America, but attempts to advance that literature by focusing on the significance of the family in particular on ‘second generation’ memory in Chile.” (Leigh A Payne, Professor of Sociology and Latin America, St Antony's College, University of Oxford, UK)

“Daniela Jara’s moving ethnographic study of how the children of activist parents themselves remember the state violence of the Pinochet dictatorship is deeply thoughtful and sociologically rich. In its original and unique focus on the neglected second generation and on the role of the family in the transmission of haunting memories, Children and the Afterlife of State Violence sheds crucial light on the intimacies and affectivities of the afterlives of political events.” (Avery Gordon, Professor of Sociology, University of California, Santa Barbara, US)