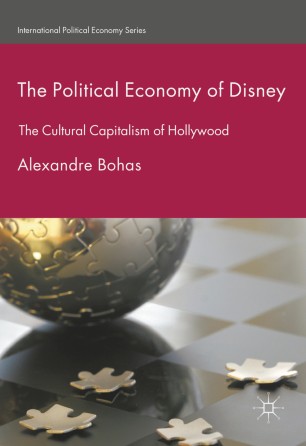 The Political Economy of Disney

The Cultural Capitalism of Hollywood

This book sheds new light on the socio-economic impact of multinational corporations. Combining Cultural Studies and International Political Economy, it provides a revealing analysis of the Walt Disney Company, and by extension the wider Hollywood studio system. It does so by examining the cultural and economic forces powering the industry's expansion, the 'civilisation' that Disney disseminates, and the various ways that societies beyond the USA have adopted facets of the Hollywood productions to which they are exposed. Identifying both the strengths and the weaknesses of these transnational firms, it demonstrates the significance of their contribution to American power and predominance.

Alexandre Bohas is a Lecturer at Université Paris 1 Panthéon-Sorbonne, France, and a specialist in International Political Economy. His research deals with cultural globalization, transnational companies and American power.

“Alexandre Bohas has given us an empirically rich account of the political economy of Hollywood in general and Disney in particular. It also makes a very considerable contribution to the conceptual development of cultural approaches in International Political Economy, showing admirably the intertwining of commercial strategies, symbolic constructions and audience reactions in the development and politics of Disney as a phenomenon. A great read for those interested in either cultural political economy or the politics of the film industry.” (Matthew Paterson, University of Ottawa, Canada)

“Cultural capitalism shapes how people perceive, understand and act in the world. It creates imageries and narratives that cut across borders and shape diverse cultures and power relations. In this world, no nation-state, corporation or cultural network compares to Disney, and no other author has produced such a profound analysis of this phenomenon as Alexandre Bohas.” (Philip G. Cerny, University of Manchester, UK, and Rutgers University, USA

“Bringing together insights from international political economy, cultural studies and economic sociology, this book provides a thoughtful analysis of the potent role of the Disney company in global, national and everyday life.” (Jacqueline Best, University of Ottawa, Canada)

“‘Alexandre Bohas’ interests combine IPE analyses, international business theories and cultural studies. In the present volume Bohas has also been able to draw on his long experience in working for a multinational corporation. The exposition is clear and the contribution to the literature evident. It is a major achievement.” (AJR Groom, University of Kent, UK)