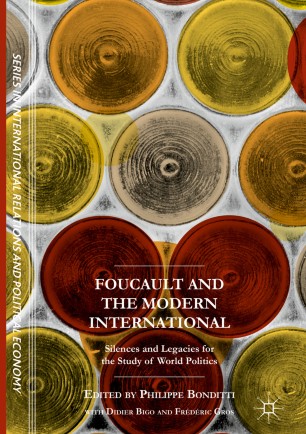 Foucault and the Modern International

Silences and Legacies for the Study of World Politics

This book addresses the possibilities of analyzing the modern international through the thought of Michel Foucault. The contributors question four of the most self-evident characteristics of our contemporary world—‘international,’ ‘(neo)liberal,’ ‘biopolitical’ and ‘global’—and thus fill significant gaps in both international and Foucault studies. The chapters discuss what a Foucauldian perspective does or does not offer for understanding international phenomena while also questioning many appropriations of Foucault’s work. This transdisciplinary volume will serve as a reference for scholars and students of international relations, international political sociology, international political economy, political theory/philosophy and critical theory more generally.
Philippe Bonditti is Assistant Professor at the European School of Political and Social Science (ESPOL-UCL), France.
Didier Bigo is Associate Professor at Sciences Po Paris, France, and Professor of International Relations at Kings College London, UK.
Frédéric Gros is Professor of Philosophy at Sciences Po Paris, France.