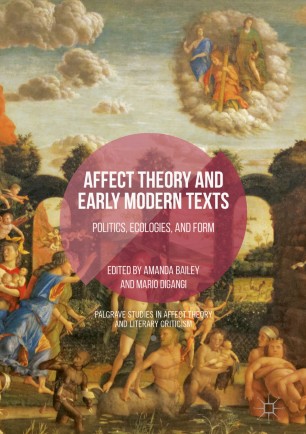 The first book to put contemporary affect theory into conversation with early modern studies, this volume demonstrates how questions of affect illuminate issues of cognition, political agency, historiography, and scientific thought in early modern literature and culture. Engaging various historical and theoretical perspectives, the essays in this volume bring affect to bear on early modern representations of bodies, passions, and social relations by exploring: the role of embodiment in political subjectivity and action; the interactions of human and non-human bodies within ecological systems; and the social and physiological dynamics of theatrical experience. Examining the complexly embodied experiences of leisure, sympathy, staged violence, courtiership, envy, suicide, and many other topics, the contributors open up new ways of understanding how Renaissance writers thought about the capacities, pleasures, and vulnerabilities of the human body.

Amanda Bailey is Professor of English at the University of Maryland, USA. She is the author of Of Bondage: Debt, Property, and Personhood in Early Modern England, Masculinity and the Metropolis of Vice, 1550-1650, co-edited with Roze Hentschell, and Flaunting: Style and the Subversive Male Body in Renaissance England.
Mario DiGangi is Professor of English at Lehman College and the Graduate Center, CUNY. He is the author of The Homoerotics of Early Modern Drama and Sexual Types: Embodiment, Agency, and Dramatic Character from Shakespeare to Shirley. He has edited Romeo and Juliet, A Midsummer Night’s Dream, and The Winter’s Tale.

“The book focuses more on distilling an early modern theory of affect than on employing modern theories of affect aimed at reading manifestations of affective subjectivities engendered by different materialist phenomena, and corporeal and psychological responses to them. … The combination of new scholarship, original connections between ideas and texts, intellectually stimulating criticism, and elegant writing makes Affect Theory a volume of essays that will be read and re-read by anyone working on affect theory.” (Goran Stanivukovic, Renaissance and Reformation, Vol. 42 (1), 2019)

“Affect Theory and Early Modern Texts successfully ‘use[s] affect as a prism through which to read early modern cultural, economic, and political phenomena’ … . In doing so, it contributes substantially to scholarly efforts to historicize affect and emotion, and to ongoing deliberations on the relationship between thinking and feeling.” (Ronda Arab, Renaissance Quarterly, Vol. 72 (1), 2019)