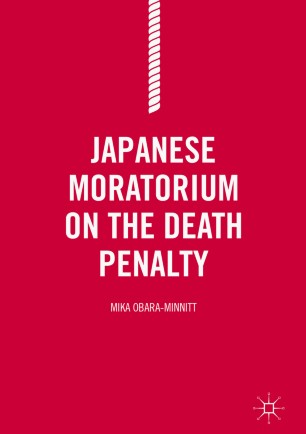 Japanese Moratorium on the Death Penalty

Offering a timely reanalysis of the issue of Japan’s capital punishment policy, this cutting edge volume considers the de facto moratorium periods in Japan’s death penalty system and proposes an alternative analytical framework to examine the policy. Addressing how the Ministry of Justice in Japan justified capital punishment policy during the de facto moratorium periods from 1989 to 1993, from 2009 to 2010 and from 2010 to 2012, the author debates the misconceptions surrounding the significance of these moratoriums.

The book evidences the approach, rationale and evolution of Japan’s Ministry of Justice in consistently justifying capital punishment policy during the different execution-free periods and provides a better understanding of the powerful unelected elite who actually drive the capital punishment system in Japan. Based on parliamentary proceedings, public opinion surveys and periodical reports by both international and domestic human rights NGOs as well as interviews of government ministers, NGO staff, pro- and anti-death-penalty advocates, this text is key reading for those interested in Japan, its government, criminal justice system and policies on the death penalty and human rights.

Dr Mika Obara-Minnitt is Research Fellow at the Institute of Asian Cultural Studies, International Christian University, Japan. She is the co-author of The International Library of Essays on Capital Punishment, Volume II: Policy and Governance, and has taught international relations and political analysis at Loughborough University, UK.