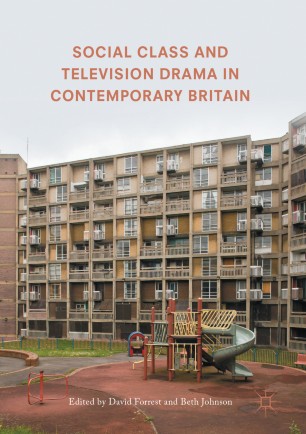 A rich and nuanced approach to class and its mediation through contemporary British television drama, this collection responds to the precarity that circulates and constricts in ‘Austerity Britain’, pre- and post-Brexit. The book self-consciously eschews obvious class-bound texts such as Shameless and Downton Abbey, offering fresh perspectives and insights on popular programmes such as This is England and Happy Valley. Although class is a central theme, the contributors also draw on theoretical work on emotion, gender and ethnicity.

This collection is a wide-ranging exploration of contemporary British television drama and its representations of social class. Through early studio-set plays, soap operas and period drama, the volume demonstrates how class provides a bridge across multiple genres and traditions of television drama. The authors trace this thematic emphasis into the present day, offering fascinating new insights into the national conversation around class and identity in Britain today. The chapters engage with a range of topics including authorial explorations of Stephen Poliakoff and Jimmy McGovern, case studies of television performers Maxine Peake and Jimmy Nail, and discussions of the sitcom genre and animation form. This book offers new perspectives on popular British television shows such as Goodnight Sweetheart and Footballers’ Wives, and analysis of more recent series such as Peaky Blinders and This is England.

David Forrest is Senior Lecturer in Film Studies at the University of Sheffield, UK. He is the author of Social Realism: Art, Nationhood and Politics (2013), co-editor of Filmurbia: Screening The Suburbs (2017) with Graeme Harper and Jonathan Rayner, and is currently at work on a book entitled New Realisms: Contemporary British Cinema.
Beth Johnson is Associate Professor of Film and Media at the University of Leeds, UK. Her publications include Paul Abbott (2013) and alongside David Forrest she recently co-edited a dossier on ‘Northern English Stardom’ in The Journal of Popular Television (4/2, 2016).

“Rather than homogenise class’s meaning, the editors open the collection up to considering how television constructs its own images of class. Class is approached as a dynamic issue, present as an overt object of representation as well as a set of ideological positions which shape television’s visual address.” (Daniel Martin, Critical Studies in Television, Vol. 14 (4), September, 2019)
“The authors here adopt a variety of critical approaches that, while alive to the importance in itself of class visibility in contemporary television, are also alert to the problematic discourses it sometimes generates. … This is an indispensable book for anyone wanting to know more about recent British television drama, and why it remains an important subject of study.” (Neil Archer, cercles.com, July)
Buy options