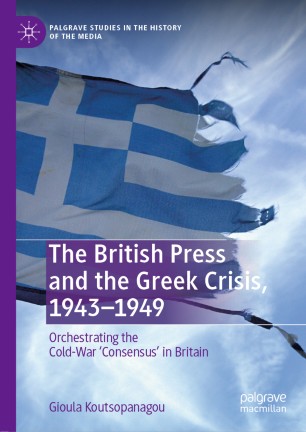 Orchestrating the Cold-War ‘Consensus’ in Britain

This book provides the first detailed analysis of how interactions between government policy and Fleet Street affected the political coverage of the Greek civil war, one of the first major confrontations of the Cold War. During this period the exponential growth of media influence was an immensely potent weapon of psychological warfare. Throughout the 1940s the press maintained its position as the most powerful medium and its influence remained unchallenged. The documentary record shows that a British media consensus was more fabricated than spontaneous, and the tools of media persuasion and manipulation were extremely important in building acceptance for British foreign policy. Gioula Koutsopanagou examines how this media consensus was influenced and molded by the British government and how Foreign Office channels were key to molding public attitudes to British foreign policy. These channels included system of briefings given by the News Department to the diplomatic correspondents, and the contacts between embassies and the British foreign correspondents.

Gioula Koutsopanagou is founding director of the Media History Workshop (ETMIET) in the Research Centre for Modern Greece at Panteion University, Greece. She is adjunct academic staff of the Faculty of Humanities at Hellenic Open University. She is the co-editor of the Encyclopedia of the Greek Press. Her monograph on British Cultural and Information Publicity Policy in Greece, 1943-1950 will be published in 2019.

“Gioula Koutsapanagou’s fascinating and impressively researched book delivers far more than its title promises. In lucid prose, it illustrates the role of the press and, behind it, the Foreign Office’s Information Research Department in orchestrating hostility to the Soviet Union.  In so doing, it casts light on the key contribution to the Cold War played by British and American interference in the Greek Civil War.” (Paul Preston CBE, Principe de Asturias Professor of Contemporary Spanish Studies and Director of the Cañada Blanch Centre for Contemporary Spanish Studies, LSE, UK)

“Supported by meticulous and wide-ranging archival research, this inspiring book breaks new ground in adding significantly to our understanding of the communicative structures of media propaganda. Beyond the usual confines of national media history, it enables a timely appreciation of the direct yet subtle role of the press in an international context during the post-war era through a well-considered case study of the Greek crisis.” (Martin Conboy, Professor of Journalism History, University of Sheffield, UK)

“A must read study of the attitudes of the press towards Greece, and the role of the UK government in influencing those attitudes. It is a valuable resource for historians interested in the UK press, Greek politics and the early stages of the Cold War.” (Thomas O’Malley, Emeritus Professor of Media, Aberystwyth University, UK)

“Gioula Koutsopanagou has written a fascinating account of the British Foreign Office’s manipulation of press coverage and commentary on the Greek civil war, going from the high tide of enthusiasm for the left at the end of World War II to the beginning of the Cold War. It is a valuable addition to the historical literature on diplomacy, propaganda and the news media.” (John Jenks, Professor of Journalism, Dominican University, USA)