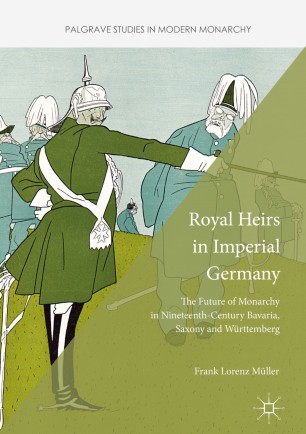 The Future of Monarchy in Nineteenth-Century Bavaria, Saxony and Württemberg

This book explores the development and viability of Germany’s sub-national monarchies in the decades before their sudden demise in 1918. It does so by focusing on the men who turned out to be the last ones to inherit the crowns of the country’s three smaller kingdoms: Prince Ludwig of Bavaria, Prince Friedrich August of Saxony and Prince Wilhelm of Württemberg. Imperial Germany was not a monolithic block, but a motley federation of more than twenty allied regional monarchies, headed by the Kaiser. When the German Reich became a republic at the end of the First World War, all of these kings, grand dukes, dukes and princes were swept away within a fortnight. By examining the lives, experiences and functions of these three men as heirs to the throne during the decades when they prepared themselves for their predestined role as king, this study investigates what the future of the German model of constitutional monarchy looked like before it was so abruptly discarded.

Frank Lorenz Müller teaches Modern History at the University of St Andrews, UK. He works on nineteenth-century European history and specializes in the history of monarchy. In 2011 he published Our Fritz: Emperor Frederick III and the Political Culture of Imperial Germany. Together with Heidi Mehrkens he has edited Sons and Heirs: Succession and Political Culture in Nineteenth-Century Europe (2015) as well as Royal Heirs and the Uses of Soft Power in Nineteenth-Century Europe (2017).