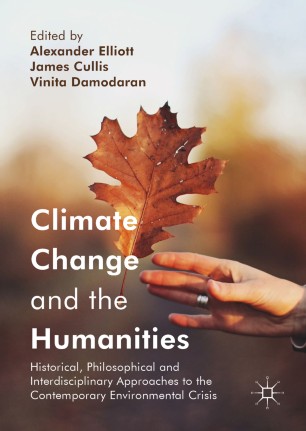 Climate Change and the Humanities

Historical, Philosophical and Interdisciplinary Approaches to the Contemporary Environmental Crisis

This  volume  of  essays  fills  a  lacunae  in  the  current  climate  change  debate  by  bringing  new perspectives on the role of humanities scholars within this debate. The humanities have historically played an important role in the various debates on environment, climate and society. The past two decades especially have seen a resurfacing of these environmental concerns across humanities disciplines in the wake of what has been termed climate change. This book argues that these disciplines should be more confident and vocal in responding to climate change while questioning the way in which the climate change debate is currently being conducted in academic, political and social arenas. Addressing climate change through the varied approaches of the humanities means re-thinking and re-evaluating its fundamental assumptions and responses to perceived crisis through the lens of history, philosophy and literature. The volume aims thus to be a catalyst for emerging scholarship in this field and to appeal to an academic and popular readership.

Alexander Elliott is a DPhil candidate and Associate Tutor at the University of Sussex, UK, in the department of Social and Political Thought. He is also a graduate associate of the Centre for World Environmental History. His research interests include climate change, epistemology and the history of philosophy.

James Cullis is an MPhil student at the University of Sussex, UK, associated with the Centre for World Environmental History and the Centre for Intellectual History.  His research deals with the way environmental and geographic concerns arose within Scottish Enlightenment accounts of societal progress.

“The chapters in this volume offer nuanced and detailed perspectives on the challenges of knowing and representing climate change. … they provide an extensive overview of a set of cross-temporal environmental themes and make a forceful case for interdisciplinary conversations on climate change.” (Ramya K Tella, Ecology, Economy and Society, Vol. 3 (1), January, 2020)
Buy options