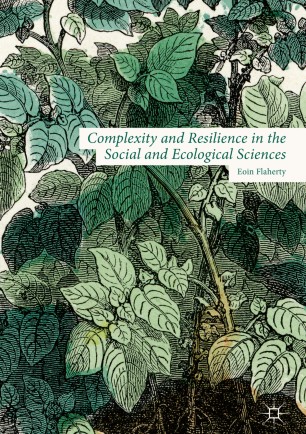 Complexity and Resilience in the Social and Ecological Sciences

‘There are books one reads and which provide so much of value that it is immediately obvious that they will shape your own way of thinking and working for a long time to come. Paul Cilliers’ Complexity and Postmodernism (1998) had that effect on me and continues to do so. Flaherty has written another with the same potential. Read it.’
-Professor David Byrne, Department of Sociology, Durham University, UK
‘This is a landmark publication. Flaherty makes a compelling case for the integration and fusion of ecological resilience and complexity theory to create a novel framework for complexity-based social science and resilience-based human ecology. Flaherty’s book offers a bold and innovative approach to understanding and working though the anthropocene. It is appropriate that a book on the centrality of complexity thinking puts forward creative injunctions for greater interdisciplinarity, and for a methodologically rigorous and normatively progressive navigation of the anthropocene. Complexity and Resilience in the Social and Ecological Sciences has cleared a path that others will follow.’
-Professor John Barry, School of History, Anthropology, Philosophy and Politics, Queen’s University Belfast, Ireland
This book introduces a new approach to environmental sociology, by integrating complexity-informed social science, Marxian ecological theory, and resilience-based human ecology. It argues that sociologists have largely ignored developments in ecology which move beyond functionalist approaches to systems analysis, and as a result, environmental sociology has failed to capitalise not only on the analytical promise of resilience ecology, but on complementary developments in complexity theory. By tracing the origins and discussing current developments in each of these areas, it offers several paths to interdisciplinary dialogue. Eoin Flaherty argues that complexity theory and Marxian ecology can enhance our understanding of the social aspect of social-ecological systems, whilst a resilience approach can sharpen the analytical power of environmental sociology.

Eoin Flaherty is Assistant Professor of Sociology at University College Dublin, Ireland. He studies patterns of inequality over time, and how they are formed, and maintained.