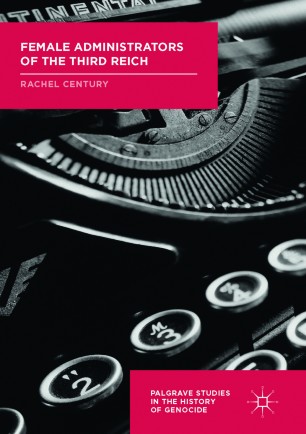 Female Administrators of the Third Reich

This book compares female administrators who specifically chose to serve the Nazi cause in voluntary roles with those who took on such work as a progression of established careers. Under the Nazi regime, secretaries, SS-Helferinnen (female auxiliaries for the SS) and Nachrichtenhelferinnen des Heeres (female auxiliaries for the army) held similar jobs: taking dictation, answering telephones, sending telegrams. Yet their backgrounds and degree of commitment to Nazi ideology differed markedly. The author explores their motivations and what they knew about the true nature of their work. These women had access to information about the administration of the Holocaust and are a relatively untapped resource. Their recollections shed light on the lives, love lives, and work of their superiors, and the tasks that contributed to the displacement, deportation and death of millions. The question of how gender intersected with Nazism, repression, atrocity and genocide forms the conceptual thread of this book.

Rachel Century is the HMD Development Manager for the Holocaust Memorial Day Trust. Rachel lives in Hertfordshire with her husband Dan and their two boys, Zack and Toby.

“Century’s book provides an original and important contribution to our understanding of women in the Third Reich. Her analysis of SS female auxiliaries, female communication auxiliaries of the army and secretaries gives a broad coverage of female administrators under National Socialism. Century shows how many ordinary women in the Third Reich contributed to the establishment, consolidation and maintenance of the regime by administrating for the Nazis. Furthermore, she demonstrates that the documentation they handled contained indications of persecution and mass death from the ambiguous to the undeniable.” (Lisa Pine, London South Bank University, UK)

“In examining a large but hitherto ignored group of women in Nazi Germany, Rachel Century performs an important service. She shows that the Nazis’ female administrators were not perpetrators but neither were they victims. The choices they made facilitated the regime’s functioning but did not make them feel implicated in its crimes. The ethical implications of this position were and remain dangerous, offering many warnings for the present.” (Dan Stone, Royal Holloway, University of London, UK)