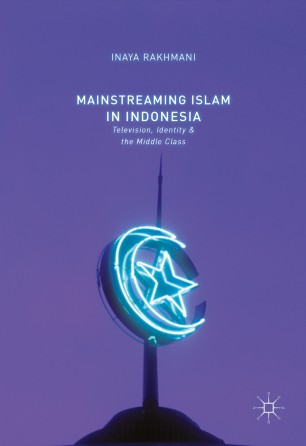 Television, Identity, and the Middle Class

This cutting edge book considers the question of Islam and commercialisation in Indonesia, a majority Muslim, non-Arab country. Revealing the cultural heterogeneity behind rising Islamism in a democratizing society, it highlights the case of television production and the identity of its viewers. Drawing from detailed case studies from across islands in the diverse archipelagic country, it contends that commercial television has democratised the relationship between Islamic authority and the Muslim congregation, and investigates the responses of the heterogeneous middle class towards commercial da’wah. By taking the case of commercial television, the book argues that what is occurring in Indonesia is less related to Islamic ideologisation than it is a symbiosis between Muslim middle class anxieties and the workings of market forces. It examines the web of relationships that links Islamic expression, commercial television, and national imagination, arguing that the commercialisation of Islam through national television discloses unrequited expectations of equality between ethnic and religious groups as well as between regions.

Dr. Inaya Rakhmani is the Director of the Communication Research Centre, Faculty of Social and Political Sciences, Universitas Indonesia and an associate at the Asia Research Centre, Murdoch University, Australia. Dr. Rakhmani has a particular interest in the cultural political economy of knowledge, information, and entertainment as well as the role of media in processes of democratisation.

“This study provides a much-needed, original perspective on Islamism by analysing how aspects of Indonesia’s majority religion have been channelled and disseminated to audiences by the country’s most popular mass medium, television. … this book is landmark study in the emerging field of Asian cultural studies. … I highly recommend her book to scholars and students with an interest in media, cultural, sociological and religious studies.” (Edwin Jurriëns, newbooks.asia, February, 2018)

“Inaya Rakhmani offers a convincing analysis of the Islamisation of the public sphere in post-Suharto Indonesia as a result not of Islamist activism but commercialisation of the media.” (Martin van Bruinessen, Professor, Department of Philosophy and Religious Studies, Utrecht University, Netherlands)

“What does the commercialization of television and particularly religious content do in a highly complex pluralistic society such as Indonesia? In this pioneering study, Inaya Rakhmani shows that the outcomes are far from 'democratic'. Through careful attention to state policy, production processes, thematic analysis and audience interviews, Rakhmani provides an important lesson in how to understand cultural complexity, and its everyday politics, through the imperfect lens of media institutions. An important and welcome contribution to comparative media research. ” (Nick Couldry, Professor of Media, Communications and Social Theory, London School of Economics and Political Science, UK)

“This book provides an original analysis of the reproduction of social exclusion when religion meets nation and market. It debunks the notion that commercialised ‘mainstream Islam’ can arrest the decline of social solidarity in modern Indonesia.” (Vedi Hadiz, Professor of Asian Studies, Asia Institute, The University of Melbourne, Australia)

“In this concise and well-written book Inaya Rakhmani convincingly demonstrates how in Indonesia the interaction between commercial media, upward oriented educated Muslim middle classes, and nationalist developmentalism results in the mainstreaming of a conservative Islam, which stands in strong contrast with images of an expanding fundamentalist Islamism usually hitting the headlines. A must read for everybody interested in media, middle class and contemporary Islam.” (Henk Schulte Nordholt, Head of Research, Royal Netherlands Institute of Southeast Asian and Caribbean Studies (KITLV), Netherlands and Professor of Indonesian History, Leiden University, Netherlands)