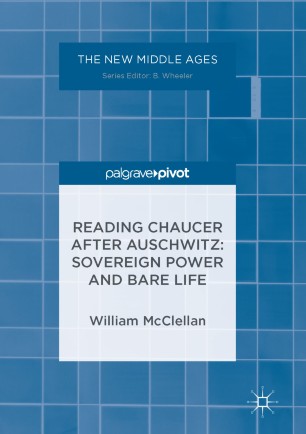 Drawing on the work of Holocaust writer Primo Levi and political philosopher Giorgio Agamben McClellan introduces a critical turn in our reading of Chaucer. He argues that the unprecedented event of the Holocaust, which witnessed the total degradation and extermination of human beings, irrevocably changes how we read literature from the past. McClellan gives a thoroughgoing reading of the Man of Law’s Tale, widely regarded as one of Chaucer’s most difficult tales, interpreting it as a meditation on the horrors of sovereign power. He shows how Chaucer, through the figuration of Custance, dramatically depicts the destructive effects of power on the human subject. McClellan’s intervention, which he calls “reading-history-as-ethical-meditation,” places reception history in the context of a reception ethics and holds the promise of changing the way we read traditional texts.

William McClellan is Associate Professor of English at Baruch College, City University of New York, USA. He has written articles on medieval literature, the Holocaust, Giorgio Agamben, and political theory.