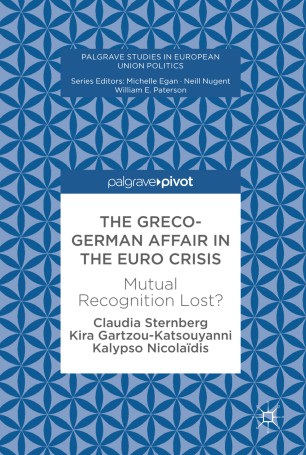 The Greco-German Affair in the Euro Crisis

This book focuses on one of the most highly charged relationships of the Euro crisis, that between Greece and Germany, from 2009 to 2015. It explores the many ways in which Greeks and Germans represented and often insulted one another in the media, how their self-understanding shifted in the process, and how this in turn affected their respective appraisal of the EU and that which divides us or keeps us together as Europeans. These stories illustrate the book’s broader argument about mutual recognition, an idea and norm at the very heart of the European project. The book is constructed around a normative pivot. On one hand, the authors suggest that the tumultuous affair between the two peoples can be read as “mutual recognition lost” through a thousand cuts. On the other, they argue that the relationship has only bent rather than broken down, opening the potential for a renewed promise of mutual recognition and an ethos of “fair play” that may even re-source the EU as a whole. The book’s engaging story and original argument may appeal not only to experts of European politics and democracy, but also to interested or emotionally invested citizens, of whatever nationality.