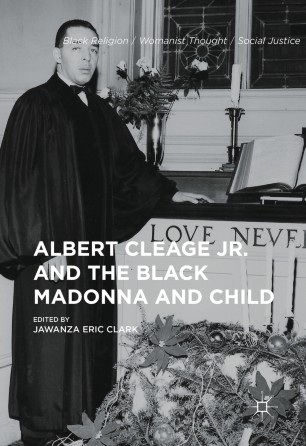 In this collection, black religious scholars and pastors whose expertise range from theology, ethics, and the psychology of religion, to preaching, religious aesthetics, and religious education, discuss the legacy of Albert B. Cleage Jr. and the idea of the Black Madonna and child.

Easter Sunday, 2017 will mark the fifty year anniversary of Albert B. Cleage Jr.’s unveiling of a mural of the Black Madonna and child in his church in Detroit, Michigan. This unveiling symbolized a radical theological departure and disruption. The mural helped symbolically launch Black Christian Nationalism and influenced the Black Power movement in the United States. But fifty years later, what has been the lasting impact of this act of theological innovation?  What is the legacy of Cleage’s emphasis on the literal blackness of Jesus?  How has the idea of a Black Madonna and child informed notions of black womanhood, motherhood? LGBTQ communities?  How has Cleage’s theology influenced Christian education, Africana pastoral theology, and the Black Arts Movement? The contributors to this work discuss answers to these and many more questions.

Jawanza Eric Clark is Associate Professor of Global Christianity at Manhattan College, USA. His first book, Indigenous Black Theology, is a work of comparative and constructive theology that incorporates the indigenous African notion of ancestor in the development of a new Black theology for the church.

“The publication of this collection of 15 essays coincides with the 50th anniversary of Albert B. Cleage Jr.’s unveiling of the mural of the black Madonna and Child … . This collection of essays is vital for understanding not only Cleage’s theology and activism but also the history of contemporary Black theology in the United States. The collection fills a large void.” (Frederick L. Ware, Black Theology, Vol. 16 (1), December, 2017)
Buy options