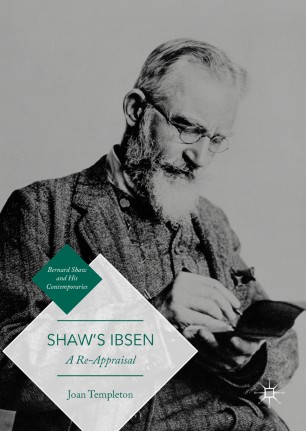 ‘Profoundly at home in the matter of Ibsen, Joan Templeton has produced a truly important book that demolishes a tired and barren critical cliché concerning Shaw's reading of Ibsen, in The Quintessence of Ibsenism, Our Theatres in the Nineties, and elsewhere. The forensic aspect is brilliantly executed, and the historical and interpretive dimensions are fresh and insightful. Shaw's Ibsen constitutes a milestone in Shaw studies.’

This book argues that Shaw was a masterful reader of Ibsen's plays both as texts and as the cornerstone of the modern theatre. Dismantling the notion that Shaw distorted Ibsen to promote his own view of the world, and establishing Shaw’s initial interest in Ibsen as the poet of Peer Gynt, it chronicles Shaw’s important role in the London Ibsen campaign and exposes the falsity of the tradition that Shaw branded Ibsen as a socialist. Further, this study shows that Shaw’s famous but maligned The Quintessence of Ibsenism reflects Ibsen’s own anti-idealist notion of his work and argues that Shaw’s readings of Ibsen’s plays are pioneering analyses that anticipate later criticism. It offers new readings of Shaw’s “Ibsenist” plays as well as a comprehensive account of Ibsen’s importance for Shaw’s dramatic criticism, from his early journalism to Our Theatres of the Nineties, both as a weapon against the inanities of the Victorian stage and as the standard bearer for modernism.

Joan Templeton is Professor Emerita of Long Island University, USA, past President of the Ibsen Society of America and the International Ibsen Committee, and has taught at the universities of Paris-Sorbonne, Tours, and Limoges. Her work includes the books Ibsen's Women and Munch’s Ibsen: A Painter’s Visions of a Playwright and twenty-five articles in journals, including PMLA, Modern Drama, Scandinavian Studies, and Ibsen Studies.

“It is a powerful book, worthy of a prize.” (R. F. Dietrich, SHAW  The Journal of Bernard Shaw Studies, Vol. 39 (1), 2019)
“Templeton (emer., Long Island Univ.) is an excellent writer and a distinguished thinker. She is also among the foremost experts on Ibsen and an astute interpreter of Shaw. … Summing Up: Highly recommended. Upper-division undergraduates through faculty.” (H. I. Einsohn, Choice, Vol. 53 (03), November, 2018)​
Buy options