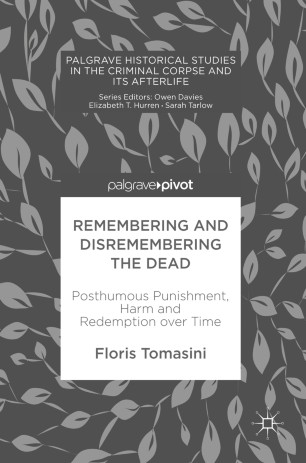 This book is open access under a CC BY 4.0 licence.
This book is a multidisciplinary work that investigates the notion of posthumous harm over time. The question what is and when is death, affects how we understand the possibility of posthumous harm and redemption. Whilst it is impossible to hurt the dead, it is possible to harm the wishes, beliefs and memories of persons that once lived. In this way, this book highlights the vulnerability of the dead, and makes connections to a historical oeuvre, to add critical value to similar concepts in history that are overlooked by most philosophers. There is a long historical view of case studies that illustrate the conceptual character of posthumous punishment; that is, dissection and gibbetting of the criminal corpse after the Murder Act (1752), and those shot at dawn during the First World War. A long historical view is also taken of posthumous harm; that is, body-snatching in the late Georgian period, and organ-snatching at Alder Hey in the 1990s.

Floris Tomasini is an applied philosopher, and until quite recently, a Post-Doctoral Wellcome Trust Fellow writing on philosophy of death. He co-wrote Examining Trust in Healthcare: A Multidisciplinary Perspective with David Pilgrim and Ivo Vassilev, and has published on topics including bioethics, philosophy of mental health, death, genomics and trust.