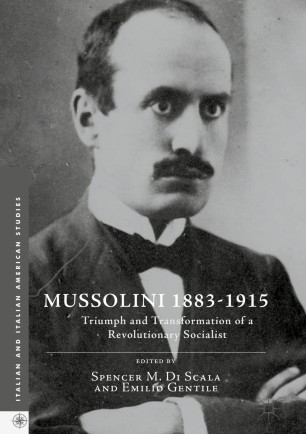 Triumph and Transformation of a Revolutionary Socialist

This book describes Mussolini’s little-known radical ideology, including his activities in Switzerland, relationship with revolutionary syndicalism, and radical journalism. It provides an in-depth treatment of the young Benito Mussolini as a revolutionary Socialist and describes the political maneuverings that took a major European Socialist party by storm before the First World War. It explains the process of how he came to dominate Italian Socialism until the crisis caused by Italy’s intervention in World War I. It illuminates Mussolini’s leadership qualities and his rise to leader of the Italian Socialist Party.

Spencer M. Di Scala is Professor of history at the University of Massachusetts Boston, USA, where he teaches undergraduate and graduate courses in modern Italian and European history.  He has won awards for his scholarship, held Fulbright Fellowships and visiting professorships at Italian universities, and has published groundbreaking books in twentieth century European history.


Emilio Gentile is an award-winning Professor Emeritus at the University of Rome and has been visiting professor at several American universities.  He has published fundamental works in the history of Italian Fascism and has led the field in researching the theme of politics as a secular religion.