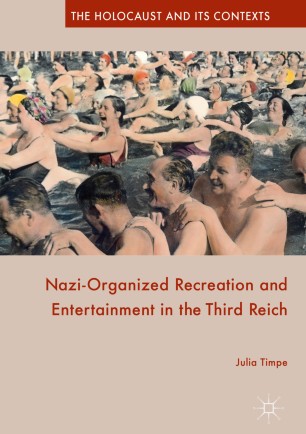 Nazi-Organized Recreation and Entertainment in the Third Reich

This book explores the activities of the Nazi regime’s vast leisure programme. Shortly after coming to power in Germany, it began a large-scale undertaking to bring happiness and a good life to so-called ‘Aryan’ Germans, carried out by the Nazi leisure organization Kraft durch Freude. Julia Timpe traces Kraft durch Freude’s practices and propaganda from 1933 through the Second World War, and analyses Nazi-organized sports classes, entertainment events, and beautification campaigns for industrial sites and the countryside, as well as Kraft durch Freude’s activities in entertaining German soldiers and concentration camp guards. Contributing to newer scholarship which focuses on the integratory force of the Nazi promise of a unified ‘racial community’ of all ‘Aryan’ Germans, this book highlights that Kraft durch Freude’s ‘everyday production of joy’ was central to Nazism, closely connected to the destructive side of the Third Reich, and ultimately a major reason for Nazism’s success among the German population.

Julia Timpe is Lecturer in Modern and Contemporary History at the University of Bremen and also teaches at Jacobs University Bremen, Germany. She has served as a College Fellow and Lecturer at Harvard University and was a Postdoctoral Fellow at the Mandel Center for Advanced Holocaust Studies at the United States Holocaust Museum.