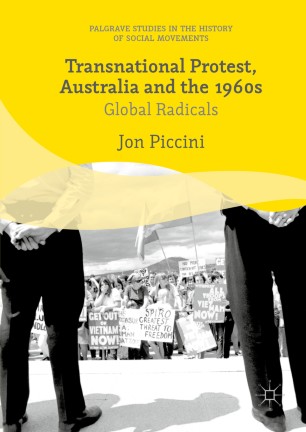 Transnational Protest, Australia and the 1960s

Australia is rarely considered to have been a part of the great political changes that swept the world in the 1960s: the struggles of the American civil rights movement, student revolts in Europe, guerrilla struggles across the Third World and demands for women’s and gay liberation. This book tells the story of how Australian activists from a diversity of movements read about, borrowed from, physically encountered and critiqued  overseas manifestations of these rebellions, as well as locating the impact of radical visitors to the nation. It situates Australian protest and reform movements within a properly global – and particularly Asian – context, where Australian protestors sought answers, utopias and allies.  Dramatically broadens our understanding of Australian protest movements, this book presents them not only as manifestations of local issues and causes but as fundamentally tied to ideas, developments and personalities overseas, particularly to socialist states and struggles in near neighbours like Vietnam, Malaysia and China.'Jon Piccini is Research and Teaching Fellow at The University of Queensland, Brisbane, Australia. His research interests include the history of human rights and social histories of international student migration.'

Jon Piccini has held teaching appointments at the University of Southern Queensland, Australia and Macquarie University, Australia. His research interests include history of the sixties, the history of human rights and social histories of international student migration.

“Piccini’s history is impressive. … his work is carefully and richly researched, and embellished with well-chosen quotes. The book engages well with the current global literature on the global turn and multiple other subjects. Overall its crisp focus on the relationship between Australian and Asian radicalism sets a benchmark for further transnational explorations of the New Left and associated social movements, globally.” (Toby Boraman, The American Historical Review, Vol. 124 (2), April, 2019)

“Transnational Protest offers a history of Australian radical activism in the late 1960s through six case studies. Each case study examines the ways that activists in Australia received and responded to ideas from overseas, or how they themselves travelled overseas and investigated radical ideas in their original contexts. … Transnational Protest is an impressive debut and represents an injection of exciting new material into the historiography of the Australian 1960s.” (Nick Irving, Australian Historical Studies, Vol. 49 (1), February, 2018)
“Transnational Protest uses case studies drawn particularly from the student, indigenous, socialist and anti-war movements to explore how activists and their practice ‘became’ transnational, in a period often viewed as the dawn of contemporary globalisation. … This is a meticulously researched and important book which contributes a great deal to our understanding of Australia’s 1960s.” (Kate Murphy, Labour History, Issue 112, May 2017)
Buy options