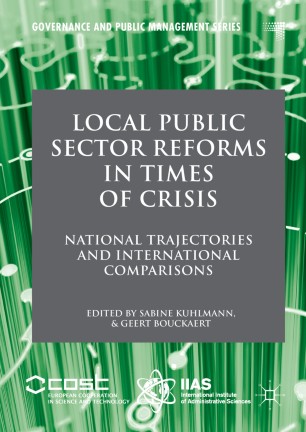 Part of the Governance and Public Management book series (GPM)

This book compares the trajectories and effects of local public sector reform in Europe and fills a research gap that has existed so far in comparative public administration and local government studies. Based on the results of COST research entitled, ‘Local Public Sector Reforms: an International Comparison’, this volume takes a European-scale approach, examining local government in 28 countries. Local government has been the most seriously affected by the continuously expanding global financial crisis and austerity policies in some countries, and is experiencing a period of increased reform activity as a result. This book considers both those local governments which have adopted or moved away from New Public Management (NPM) modernization to ‘something different’ (what some commentators have labelled ‘post-NPM’), as well as those which have implemented ‘other-than-NPM measures’, such as territorial reforms and democratic innovations.

Sabine Kuhlmann is Full Professor of Political Science, Administration and Organization at the University of Potsdam, Germany. Since 2011, she has been a member of the National Regulatory Control Council of the German Federal Government and, since 2012, Vice-President of the European Group for Public Administration (EGPA) and Chair of the COST-Action LocRef.

Geert Bouckaert is Professor at the Faculty of Social Sciences and the former Director of the KU Leuven Public Governance Institute, Belgium. He is Coordinator of the Policy Research Centre - Governmental Organization - Decisive Governance and President of the International Institute of Administrative Sciences (IIAS).