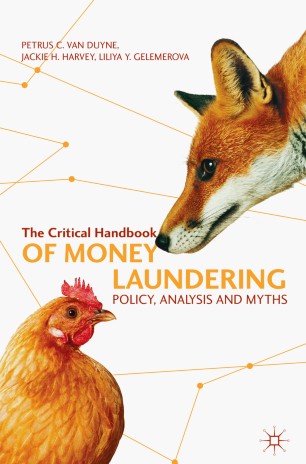 The Critical Handbook of Money Laundering

The overarching aim of this book is to bring order to the subjects of money laundering and of the anti-money laundering frameworks that have been written over the past thirty years.  It provides scholars, practitioners and policy makers with a guide to what is known of the subject thus far.  The book examines critically the underlying assumptions of research and of policy-making in the field and offers a systematic review of the most important policy and academic literature on the subject.

Petrus C. van Duyne, Professor emeritus, is one of the pre-eminent authors of the subjects of  cross-border and organised crime, money-laundering and corruption. Known to be a critical and independent thinker, author of around 140 publications, his papers are widely downloaded and referenced. As both a psychologist and jurist he has been researching in the field since the 1980s.

Dr Jackie Harvey is Professor of Financial Management and Director of Business Research at Newcastle Business School. Her research is focused on criminal financial management, in particular money laundering.  Prior to becoming an academic in 2000, Jackie spent 10 years working for a major merchant bank, followed by a 3 year posting as fiscal policy adviser to the Ministry of Finance in Belize.

Dr Liliya Gelemerova is an Honorary Senior Lecturer at the University of Manchester, a member of the Steering Committee of Finance against Trafficking and a Senior Financial Crime Advisor at Commerzbank, London. Formerly Head of International Contacts and Legal Coordination at Bulgaria’s Financial Intelligence Unit, and following a role at Transparency International, Berlin, Liliya worked for several investigative consultancy firms in London before moving into inhouse banking compliance.

“This is an original, refreshing and entertaining look at some of the issues perplex many in the field. It very effectively confronts often unsupported orthodoxies, and is an indispensable addition to the critical literature in the area.” (Peter Alldridge, Drapers’ Professor of Law, Queen Mary University of London)
Buy options