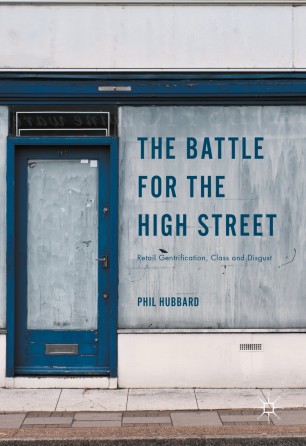 The Battle for the High Street

This book analyses the social and cultural status of high streets in the age of recession and austerity. High streets are shown to have long been regarded as the heart of many communities, but have declined to a state where boarded-up and vacant retail units are a familiar sight in many British cities. The book argues that the policies deemed necessary to revive the fortunes of high streets are often thinly-veiled attacks on the tastes and cultures of the working class. Policy-makers often promote boutiques, art galleries and upmarket cafés at the expense of some of the outlets frequented by less affluent populations, including betting shops, fast food takeaways, discount stores and bargain booze outlets.
Highlighting the social and cultural roles that so-called 'dying' high streets continue to play in the lives of working class and disadvantaged populations, this book provides a powerful argument against retail gentrification, and a timely analysis of class conflict in austerity Britain. It will be of great interest to scholars of geography, social policy and cultural studies.

Phil Hubbard is Professor of Urban Studies at the University of Kent, UK. He is author of several books including Cities and Sexualities (2012), City (2006), People and Place (2001), and The Entrepreneurial City (1998). His research has shed new light on the understanding of social exclusion, marginalization and displacement by showing how urban restructuring profoundly shapes and influences contemporary social life.

“Phil Hubbard shows that the moral panic invoked by the “crisis” of the High Street is part of a long-term effort to cleanse cities of their lowest-income residents and ethnic enclaves and replace them with art galleries, trendy boutiques and hipster cafés…. This is required reading for everyone who takes social diversity in cities seriously.” (Sharon Zukin, Professor of Sociology, Brooklyn College and CUNY Graduate Centre, USA)

“The Battle for the High Street provides a welcome alternative to the notion that the High Street is best served by craft beer and sourdough bakeries… Phil Hubbard argues that many of our most demonised High Streets, from Margate to Newcastle, actually work well in providing for the poor, and convincingly claims that the shops that signify a “healthy” High Street are specifically designed to exclude them.” (Owen Hatherley, author of The Ministry of Nostalgia)

“This beautifully detailed book makes a compelling argument against the political narrative of “dying local High Streets in need of rescue”, revealing how an idealized affluent middle class consumer informs local and national policy-making in ways that denigrate and displace working class communities. Essential reading for scholars of gentrification, and anyone concerned about the future of their local High Street.” (Imogen Tyler, Professor of Sociology, Lancaster University, UK)

“When the concept of gentrification is becoming gentrified itself by de-politicising it from Ruth Glass's original concept of class oppression and struggle, this book smashes us right back into a political critique of class distinction. It tackles the snobbery towards High Streets which are apparently "failing” because of the pound shop and the charity shop and asks the important questions about who High Streets are for.” (Lisa MacKenzie, London School of Economics and Political Science, UK)

“In this acute and original account of urban gentrification, Phil Hubbard engages the High Street to explore the uncut spectrum of everyday life, from drinking, eating, betting and buying sex, in relation to the cleansing of urban vitality on highly prejudiced grounds. A great read.” (Suzanne Hall, London School of Economics and Political Science, UK)

“The pages of this book take you on a stroll down the High Street and with each critical step the reader comes to realize that urban theorists must visit sex shops, chains pubs, betting shops and so on if they are to understand the richness of terrain necessary to develop an understanding of changing urbanism, regeneration, public space and rights to the city.” (Mark Jayne, Cardiff University, UK)

“A great book that outs the “disgusting” class politics of gentrification playing out on British High Streets. An excellent addition to the gentrification studies literature that argues for High Streets for all, not just the middle class and touristic few.” (Loretta Lees, Department of Geography, University of Leicester, UK)

“This highly readable account of the current state of the High Street challenges the orthodox view that these retail spaces are in a state of terminal decline, and calls on urban planners and policy makers to support the diverse communities that these spaces actively serve, rather than encouraging the further gentrification of the High Street. Hubbard offers a fresh and critical voice on this neglected aspect of our contemporary urban condition.” (Peter Jackson, Professor of Human Geography, University of Sheffield, UK)

“Phil Hubbard sees High Streets as social spaces, rooted in class, consumption and culture, and asks how we can regenerate them without destroying real social diversity. This is an important question and in this engaging, entertaining and well-grounded book, he provides a necessary counter-voice and antidote to much current writing and debate around retailing. A significant contribution that should be widely read and debated.” (Leigh Sparks, Professor of Retail Studies, University of Stirling, UK)

“A superb and timely analysis of the geographies of class in austerity Britain, The Battle for the High Street reveals with razor-sharp precision how the neo-political consensus is transforming the contemporary city into a divisive, divided and exclusionary space. This is an important account that and asks (and answers) difficult questions about class, space and the contemporary urban condition.” (Professor Louise Crewe, University of Nottingham, UK)