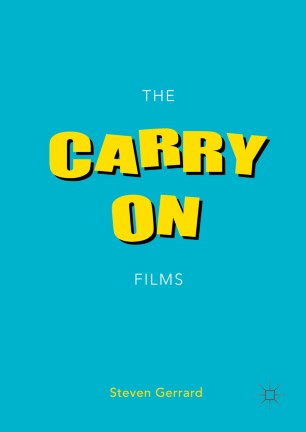 The Carry On Films

Saucy, rude and vulgar—the 31 Carry On films remain an important part of the history of British cinematic and low brow comedy. In this book, Gerrard discusses the Carry On roots in the music halls of the Victorians and the saucy seaside postcards of Donald McGill. Made in post-war Britain, these films reflect a remarkable period of social change as the British Empire faded and a nation learned to laugh at itself. Nothing was sacred to the Carry On team. James Bond and Cleopatra were mercilessly lampooned, Miss World competitions and toilet factories came in for a cinematic pasting, while Sid James’ laugh, Barbara Windsor’s wiggle, Kenneth Williams’ flared nostrils and Charles Hawtrey’s “Oh, hello!” became synonymous with laughter, merriment and fun. Gerrard’s work examines the Carry On films as part of a wider canvas linking both their heritage and tradition to the contextual world they mirrored. The Carry On Films is an essential read for Carry On fans the country through.
<
Ding dong! Carry On!

Dr Steven Gerrard is Lecturer of Film, Media and Visual Culture at the University of Wales Trinity Saint David. He has written for The Dark Side Magazine, Culture Unbound: The Journal of Current Cultural Research, We Belong Dead Publications, and his work on the Carry On films has appeared as chapters in edited collections. He loves science fiction and horror cinema, and anything to do with British Low Culture.