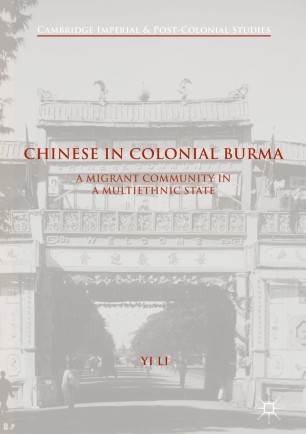 A Migrant Community in A Multiethnic State

Using previously unexplored archives from colonial institutions and individuals, and primary materials produced by the Burmese Chinese, this comprehensive study investigates over a century of history of the Burmese Chinese under British colonial rule. Due to the peculiar position of Burma in the British imperial world and the Southeast Asian Chinese network, the Chinese community had a unique experience in a Southeast Asian colony governed by Europeans with an India-based system. This book reveals, through everyday life experience, prominent community figures, and milestone events, the internal rivalry and integration among different regional groups within the community, and the general impressions it left in contemporary observations and communal memories. The book also traces historical roots of some unsolved ethnic issues in present-day Myanmar.

Yi Li received her PhD in history at the School of Oriental and African Studies, University of London, and was a Postdoctoral Fellow at the Nanyang Technological University in Singapore between 2014 and 2015. Her research interests include modern Southeast Asia and Chinese diaspora, with a particular focus on migration and colonial history.

“Li’s exhaustive coverage of Chinese and English language sources provides a new look at how the Chinese in Burma, as a smaller percentage of the diaspora in Southeast Asia, continued to transplant many of the same political, economic, and social networks through kinship connections. … it is certainly an invaluable contribution to the history of Chinese diasporic experiences, and necessary reading for scholars of Chinese and Southeast Asian studies.” (Siew Han Yeo, Journal of Burma Studies, Vol. 22 (1), June, 2018)
Buy options