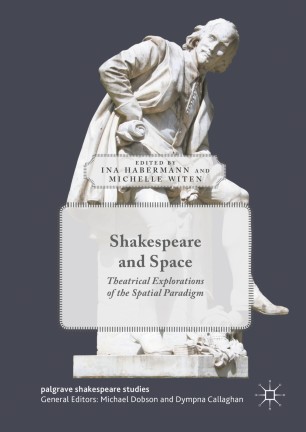 Theatrical Explorations of the Spatial Paradigm

This collection offers an overview of the ways in which space has become relevant to the study of Shakespearean drama and theatre. It distinguishes various facets of space, such as structural aspects of dramatic composition, performance space and the evocation of place, linguistic, social and gendered spaces, early modern geographies, and the impact of theatrical mobility on cultural exchange and the material world. These facets of space are exemplified in individual essays. Throughout, the Shakespearean stage is conceived as a topological ‘node’, or interface between different times, places and people – an approach which also invokes Edward Soja’s notion of ‘Thirdspace’ to describe the blend between the real and the imaginary characteristic of Shakespeare’s multifaceted theatrical world. Part Two of the volume emphasises the theatrical mobility of Hamlet – conceptually from an anthropological perspective, and historically in the tragedy’s migrations to Germany, Russia and North America.

Ina Habermann is Professor of English at the University of Basel, Switzerland. She is the author of Staging Slander and Gender in Early Modern England (2003) and Myth, Memory and the Middlebrow: J.B. Priestley and the Symbolic Form of Englishness (2010).

Michelle Witen is Postdoctoral Teaching and Research Fellow at the University of Basel, Switzerland. Her research interests include Modernist incorporations of musical structure and nineteenth-century newspapers. Her monograph James Joyce’s Absolute Music is forthcoming.