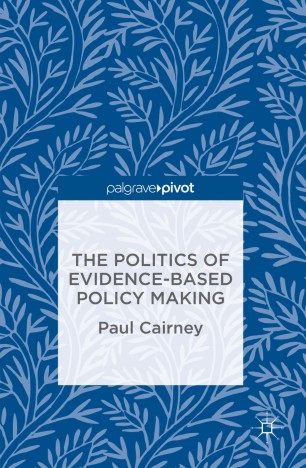 ‘This is essential reading for anyone interested in how evidence and policy interact in the real world. Paul Cairney plots an entertaining course outlining the main debates of the evidence-based policy movement, drawing on up-to-date research and fascinating case studies to show what can realistically be expected of science, and of policy. Full of succinct overviews of theoretical and empirical research, this is where I’ll be sending students and colleagues for an informative read.’– Dr Kathryn Oliver, University of Oxford, UK

‘How can policymaking make best use of evidence? We expect policymakers to follow a transparent and systematic process, and scientists to understand that actors use evidence selectively in a politically heated debate. Cairney helps us appreciate these challenges, explaining how policymakers understand and use evidence, and inviting scientists to reflect on how they can be effective in that context.’– Professor Brian Head FASSA, The University of Queensland, Australia

‘If you’re interested in evidence-based policy making (EBPM) then this is a must read. In this persuasive and highly readable book, Paul Cairney draws insights from policy theory to articulate a pragmatic view of EBPM, where scientific evidence is just one of the resources used by the many actors involved in the political systems which shape policy. He demonstrates why scientists need to adapt to the demands of real world policymaking rather than hanker after an unrealistic (and undesirable) scenario where policymaking is less messy and scientific evidence plays a more decisive role.  He provides helpful guidance for scientists on how they can adapt and engage with real world policy making and delivery.’– Professor Sandra Nutley, University of St Andrews, UK

The Politics of Evidence Based Policymaking identifies how to work with policymakers to maximize the use of scientific evidence. Policymakers cannot consider all evidence relevant to policy problems. They use two shortcuts: ‘rational’ ways to gather enough evidence, and ‘irrational’ decision-making, drawing on emotions, beliefs, and habits. Most scientific studies focus on the former. They identify uncertainty when policymakers have incomplete evidence, and try to solve it by improving the supply of information. They do not respond to ambiguity, or the potential for policymakers to understand problems in very different ways. A good strategy requires advocates to be persuasive: forming coalitions with like-minded actors, and accompanying evidence with simple stories to exploit the emotional or ideological biases of policymakers.