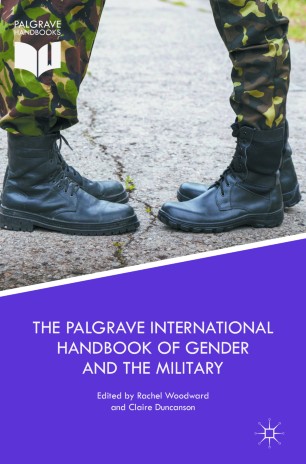 The Palgrave International Handbook of Gender and the Military

Rachel Woodward is Professor of Human Geography in the School of Geography, Politics & Sociology, Newcastle University, UK. She is co-editor of the Routledge Companion to Military Research Methods (2016), co-author with Trish Winter of Sexing the Soldier (Routledge, 2007) and author of Military Geographies (Blackwell, 2004).

Claire Duncanson is a Senior Lecturer in International Relations in the School of Social and Political Science, University of Edinburgh, UK. She is author of Gender and Peacebuilding (Polity 2016) and Forces for Good? Military Masculinities in Afghanistan and Iraq (Palgrave Macmillan 2013).

"Plunging into today's burgeoning research into the complex, intersectional dynamics of militaries (of myriad sorts), masculinities, and femininities can seem daunting. Here, though, is a terrific place to start. Woodward and Duncanson have created an accessible, worldly collection that reminds us that exploring genderings of militaries means charting processes of militarization and resistance to it."