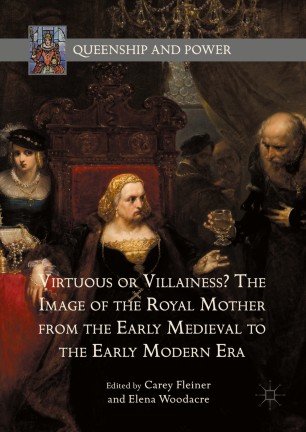 Virtuous or Villainess? The Image of the Royal Mother from the Early Medieval to the Early Modern Era

This collection addresses royal motherhood across Europe, from both the medieval and Early Modern periods, including (in)famous and not-so-famous royal mothers. The essays in this collection reveal the complexities and the subtleties inherent in the role of royal mothers and challenges these traditional stereotypes. The volume provides a fresh re-evaluation of these women, from those who have been given an almost saintly status to those who struggled against contemporary chronicles and propaganda that perpetuated the stereotypes associated with ‘bad mothers’– these particular images of saintliness and wickedness have persisted right into the modern era. This series of intriguing case studies reveals how royal mothers were perceived by their contemporaries and explores the motivation for the ways in which they are depicted in modern popular culture.  Taken together with the companion volume, Royal Mothers and their Ruling Children, this collection sheds new light on the important and challenging role of mothers within the framework of monarchy and at the epicenter of power.