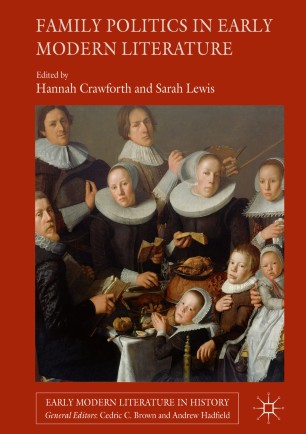 This book considers the ways that family relationships (parental, marital, sibling or other) mimic, and stand in for, political ones in the Early Modern period, and vice versa. Bringing together leading international scholars in literary-historical fields to produce scholarship informed by the perspective of contemporary politics, the volume examines the ways in which the family defines itself in transformative moments of potential crisis – birth and death, maturation, marriage – moments when the family is negotiating its position within and through broader cultural frameworks, and when, as a result, family ‘politics’ become most apparent.

Hannah Crawforth is Senior Lecturer in Early Modern Literature at King’s College, London, UK, where she is also a founding member of the London Shakespeare Centre. She is the author of Etymology and the Invention of English in Early Modern Literature (2013), co-author, with Sarah Dustagheer and Jennifer Young, of Shakespeare in London (2015), and co-editor, with Elizabeth Scott-Baumann, of On Shakespeare’s Sonnets: A Poets’ Celebration (2016).