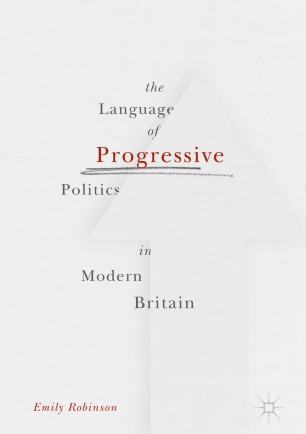 The Language of Progressive Politics in Modern Britain

This book traces the word ‘progressive’ through modern British history, from the Enlightenment to Brexit. It explores the shifting meanings of this term and the contradictory political projects to which it has been attached. It also places this political language in its cultural context, asking how it relates to ideas about progressive social development, progressive business, and progressive rock music.
‘Progressive’ is often associated with a centre-left political tradition, but this book shows that this was only ever one use of the term – and one that was heavily contested even from its inception.
The power of the term ‘progressive’ is that it appears to anticipate the future. This can be politically and culturally valuable, but it is also dangerous. The suggestion that there is only one way forward has led to fear and doubt, anger and apathy, even amongst those who would like to consider themselves ‘progressive people’.

Emily Robinson is Senior Lecturer in Politics at the University of Sussex, UK, Commissioning Editor of Renewal, and a Fellow of the Royal Historical Society. Her previous work includes History, Heritage and Tradition in Contemporary British Politics: Past Politics and Present Histories (2012).

“Emily Robinson has taken one of the central terms of modern politics and subjected it to a wonderfully erudite, searching and revealing investigation, illuminating both the highways and byways of the language of progressivism.  Her book cuts across different disciplinary perspectives, equally adept at exploring the competing historical interpretations of progress, and its multi-layered conceptual and ideological make-up. This innovative work opens new vistas and will delight and educate cultural historians and political theorists alike.” (Michael Freeden, Emeritus Professorial Fellow, Mansfield College, Oxford)

“At a time when everyone wants to seem "progressive", it's salutary to be reminded that it was not always thus.  In her subtle and sophisticated book, Emily Robinson shows what a sensitive barometer the claim to be "progressive" has been of changing standards across the 20th century:  of what counts as 'modern', what counts as 'progress', who can argue that history is on their side.  What might appear to be an empty cliche turns out to be one of the most heavily loaded claims in modern politics.  A timely, eye-opening, iconoclastic argument.” (Peter Mandler, Professor of Modern Cultural History, University of Cambridge)

“This fascinating and unique book successfully challenges the reader to rethink our understanding of the term ‘progressive’, one of the most frequently – but lazily - used of political terms. It is a tremendous example of interdisciplinary political analysis.” (Steven Fielding, Professor of Political History, University of Nottingham)

“The Language of Progressive Politics is a really terrific read. It is overflowing with insights for both political and cultural historians. Robinson segues the multiple contexts and uses of “progressive” in distinctive analytical ways. It draws on a diverse, eclectic range of sources, offering a rich, vivid etymology of the term and a biography of how it has been experienced in advertising, party politics, everyday argot and more. In approach and content, Robinson offers just the sort of challenging, provocative study that modern British political history needs to progress.” (Lawrence Black, Professor of Modern History, University of York)

“In this hugely enjoyable and illuminating history of the language of 'progressive' politics in Britain, Emily Robinson unravels the knotted threads of a powerful yet strangely enigmatic term. She shows us not only the many things we do with the label 'progressive' but also how that label itself shapes who we are and what can be done. This will be a vital source for scholars and students of British politics, history, and culture.” (James Martin, Professor of Politics, Goldsmiths University of London)