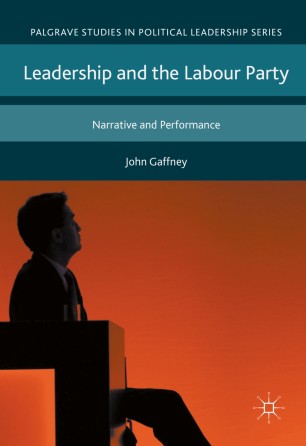 Leadership and the Labour Party

The relationships between narrative and leadership, between rhetoric and performance, between doctrine and its voicing, are crucial to party politics and are underrated by both practising politicians and scholars. This study analyses the ‘performance of leadership’ in the UK Labour Party, and what this means for a new approach to understanding politics. The main focus of this study is the five-year leadership of Ed Miliband, 2010-2015. The fortunes of the party and the party leadership can be apprehended as a series of performed rhetorical events. A political leader’s persona is a construction that performs – rather like an actor – in the political space. The author identifies and analyses the architecture and the modalities of leadership persona construction and performance in contemporary politics.

John Gaffney is Professor of Politics at Aston University, Birmingham, UK and Co-Director of the Aston Centre for Europe.

John Gaffney is Professor of Politics at Aston University, Birmingham, UK and Co-Director of the Aston Centre for Europe.

“John Gaffney has written a thoroughly timely yet spirited and wonderfully insightful book on Labour’s travails with the challenges of leadership, particularly in the post-Blair years. He shows us how Labour’s leaders ‘perform’ their role by means of speech and character, seeking – often despite their own or others’ ambivalence – to embody a unifying narrative without losing touch with the party’s historic ‘mission’. Gaffney then explores Ed Miliband’s recent troubled rendering of this impossible role. This is a book that should be read by anyone interested in the Labour Party and the Left today.” (James Martin, Professor of Politics, Goldsmiths, University of London, UK)