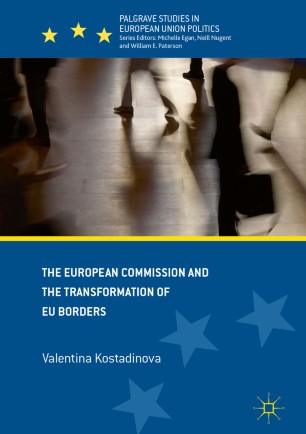 The European Commission and the Transformation of EU Borders

This book examines the contribution of the European Commission to the process of transformation of EU borders. Migration issues have been at the centre of EU political debates in recent years. From national controversies sparked by the economic difficulties in the aftermath of the 2008 economic downturn to EU-wide problems caused by the record number of asylum seekers looking for a refuge in the Union. Simultaneously, the EU migration regime has undergone a profound change since the 1980s as a result of the developments in the integration process. Inevitably this has impacted borders, transforming their nature and functions. The author looks at four key EU policy areas, which in recent decades have substantially altered the EU migration regime: the European Neighbourhood Policy, social policy, border controls, and free movement of people. Based on a variety of Commission documents the analysis focuses on the different borders that have been transformed, their altered nature and functions, and the specific impact of the European Commission on to these processes.

“Kostadinova’s study needs to be on the must-read list of scholars with a migration and European Union focus alike. It is an excellent consolidation of and starting point for further research on the role of international actors other than states in the transformation of borders. At the same time, it offers valuable insights into the operation and development of the European Union … the Commission itself would be well advised to carefully consider Kostadinova’s findings in going forward.” (Susi Foerschler, Border Criminologies, law.ox.ac.uk, October, 2017)