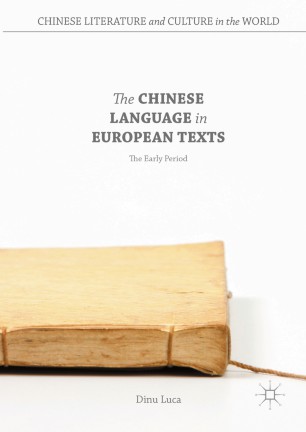 The Chinese Language in European Texts

This detailed, chronological study investigates the rise of the European fascination with the Chinese language up to 1615. By meticulously investigating a wide range of primary sources, Dinu Luca identifies a rhetorical continuum uniting the land of the Seres, Cathay, and China in a tropology of silence, vision, and writing. Tracing the contours of this tropology, The Chinese Language in European Texts: The Early Period offers close readings of language-related contexts in works by classical authors, medieval travelers, and Renaissance cosmographers, as well as various merchants, wanderers, and missionaries, both notable and lesser-known. What emerges is a clear and comprehensive understanding of early European ideas about the Chinese language and writing system.

“This book is a delight: smart, well-written, full of intellectual and historical surprise and illumination. Luca’s investigation of the rhetorical continuum that has assigned to ‘China’ the role of a visual other for European thought does what all the best books do: it restores to the past its opaque and fascinating difference, while revealing in it the naked, germinating seeds of our present.” (Eric Hayot, Distinguished Professor of Comparative Literature and Asian Studies, The Pennsylvania State University, USA)

“There have been quite a few accounts of the image of China in Renaissance Europe, but none has addressed in such detail the fascination that the Chinese language and its written characters exercised, and with such erudition and elegance. Luca’s book will become essential for anyone interested in this topic.” (Joan-Pau Rubiés, ICREA Research Professor, Pompeu Fabra University, Spain, and author of Travellers and Cosmographers: Studies in the History of Early-Modern Travel and Ethnology)

“Dinu Luca’s extraordinary study of the first few centuries of European response to the Chinese language and writing system integrates far more texts than any other account I have seen, restoring less well-known texts to their place in the genealogy of ideas. Luca restores the polyphony among discordant accounts. China scholars, cultural critics, historians of linguistics, ethnographers, and grammatologists will find much here to feed their reflections.” (Haun Saussy, University Professor of Comparative Literature, University of Chicago, USA)