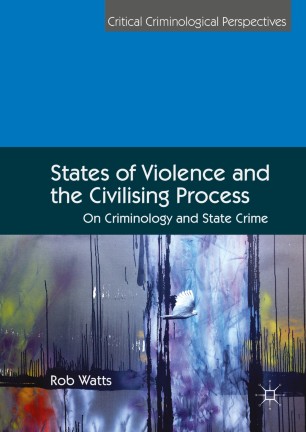 States of Violence and the Civilising Process

On Criminology and State Crime

This book offers a distinctive and novel approach to state-sponsored violence, one of the major problems facing humanity in the previous and now the twenty-first century. It addresses the question: how is it possible that large numbers of ordinary men and women are able to do the killing, torturing and violence that defines crimes against humanity? In his striking analysis, Rob Watts shows how and why states, of all political persuasions, engage in crimes against humanity, including: genocide, homicide, torture, kidnapping, illegal surveillance and detention.
This book advances a new interpretive frame. It argues against the ‘civilizing process’ model, showing how both states and social sciences like sociology and criminology have been complicit in splitting 'the social' from 'the ethical' while accepting too complacently that modern states are the exemplars of morality and rationality. The book makes the case that it is possible to bring together in the one interpretative frame, our understanding of social action involving personal motivation and ethical responsibility and patterns of collective social action operating in terms of the agencies of ‘the State’. Rob Watts identifies and charts the pathways of action and ‘practical’ (i.e. ethical) judgements which the perpetrators of these crimes against humanity constructed for themselves to make sense of what they were doing.
At once challenging and highly accessible, the book reveals the policy-making processes that produce state crime as well as showing how ordinary people do the state’s dirty work.
Rob Watts is Professor of Social Policy at RMIT University, Australia. His previous publications include The Foundations of the National Welfare State (1987), Arguing About the Australian Welfare State (1992), Discovering Risk (2006), Talking Policy: Australian Social Policy (2007) and International Criminology: A Critical Introduction (2009).

“This book is an immensely erudite and highly original work of scholarship that examines a series of sophisticated and influential social theorists – including Norman Elias, Pierre Bourdieu, and Zygmunt Bauman – in terms of the relevance of their analyses for a criminology of crimes of states.  Altogether, this book advances the case that crimes of states – including the American “war on terrorism” in the wake of 9/11 – are a complex phenomenon that requires analysis drawing upon a broad range of disciplinary inquiries.  This reader learned much of value despite adhering to a different conception of the optimal approach for a criminology of crimes of states.  Rob Watts has made an important contribution to the evolving enterprise of this criminological endeavor.” (David O. Friedrichs, Distinguished Professor of Sociology, Criminal Justice and Criminology, University of Scranton, Pennsylvania, USA)

“Drawing on examples from the Soviet Terror of the 1930s, Australian state policies that removed Aboriginal children from their parents, and the post-9/11 “war on terror” initiated by the U.S. and its allies, Watts offers an insightful exegesis on what happens when actors occupying positions of power and authority in states both define “problems” and then do everything in their power to “fix” the “problems.”  The result is a careful and thoughtful consideration of conventional criminology’s shortcomings in explaining why states commit crimes.” (Avi Brisman, Associate Professor, School of Justice Studies, Eastern Kentucky University, USA)