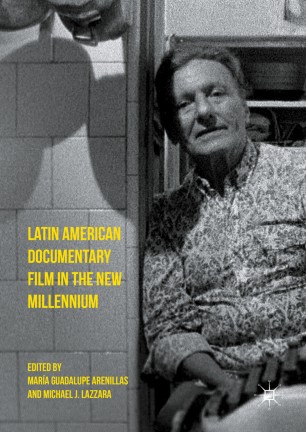 This book highlights the richness and heterogeneity of Latin American documentary film, deepening debates on salient themes. It addresses the “subjective turn” of the 1990s and 2000s and the move beyond it; the ethics of the encounter between the filmmaker and the subject/object of his or her gaze; and the performance of truth and memory, a particularly urgent topic as Latin American countries have transitioned from dictatorship to democracy. Nearly two decades into the new millennium, Latin American documentary film is experiencing renewed vibrancy and visibility on the global stage. While elements of the combative, politicized cinema of the 1960s and 1970s remain, the region’s production has become increasingly subjective, reflexive, and experimental; it both responds to and shapes global tendencies in the genre. This book broadens understanding of it by surveying a range of national contexts, styles, and practices.ont>

María Guadalupe Arenillas is Assistant Professor of Latin American Studies at Northern Michigan University, USA. She has published articles on contemporary Argentine documentary film and literature. She is co-editor of the book series Memory Politics and Transitional Justice.
Michael J. Lazzara is Associate Professor of Latin American Literature and Cultural Studies at the University of California, Davis, USA. He is the author of Luz Arce and Pinochet’s Chile: Testimony in the Aftermath of State Violence (2011), Chile in Transition: The Poetics and Politics of Memory (2006), and numerous articles on literature, politics, and film. He is also co-editor, with Vicky Unruh, of Telling Ruins in Latin America (2009).

“Arenillas and Lazzara’s book traces a commendable and up-to-date cartography of Latin American documentary film’s regional, thematic, and stylistic variations, placing these in dialogue with their respective sociocultural and political contexts. A key reference work, this volume not only explores how documentary film engages the challenges of our times—legacies of dictatorship; obstinate memories; social, ethnic, and cultural conflicts; or struggles for identity and rights—but also how it does so in ways that are artistically experimental and that once again point to the complex interfacing of aesthetics, ethics, and politics.” (Leonor Arfuch, University of Buenos Aires and author of “El espacio biográfico: dilemas de la subjetividad contemporánea”)

“Latin American documentary filmmaking is mostly know to international audiences as a politically-committed and ideologically charged cinema that references the major sociohistorical processes of the twentieth century: the Mexican Revolution, the Cuban Revolution, dictatorships, and uprisings for social justice. In the new millennium, however, tightly-controlled and often vast-scaled projects have given way to a subjective turn in which subaltern subjects speak in their own voices, the pretense of master narratives disappears, and experimentalism reigns. Arenillas and Lazzara’s sophisticated and theoretically-grounded book draws out the rich textures and human experiences captured in these films.” (David William Foster, Arizona State University and author of “Latin American Documentary Filmmaking: Major Works”)