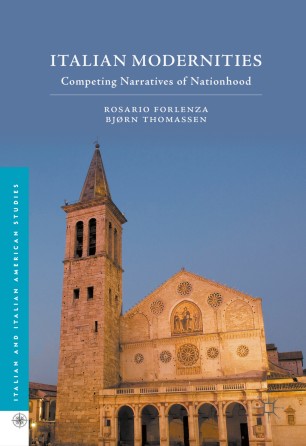 This book argues that Italy represents a privileged entry point into the comparative analysis of ideologies and experiences of modernity. The book compares how thinkers and politicians belonging to different ideological clusters - Liberalism, Communism, Fascism, Chistian Democracy - came to formulate multiple and often antagonistic visions of Italy's road to the modern. By revisiting Italian political history from the late nineteenth century until the present with a focus on transition periods, Italian Modernities explores how competing historical narratives influenced shifting understandings of Italian nationhood, thus foregrounding the active role of memory politics in the formulation of multiple modernities.

“The authors have taken on a daunting task: they do not confine themselves to a narrow analysis of various ‘narratives of modernity,’ but in effect present these narratives as vehicles for explaining all of modern Italian history. … this book is most useful as an introduction to the intellectual and political history of modern Italy. Forlenza and Thomassen do an excellent job of explaining major theorists and key junctures in the country’s twentieth-century development.” (Joshua Arthurs, American Historical Review, Vol. 123 (04), October, 2018)
“Through the prism of modernity, this book seeks to provide an engaged narrative of the history of united Italy … The authors, Rosario Forlenza and Bjørn Thomassen, have extended their scope to include political and literary approaches that were defeated, or left unfinished. In doing so, they allow the reader to reflect on the words, expectations and reflections of contemporaries.” (Claudia Baldoli, English Historical Review HER, September, 2018)

“Forlenza and Thomassen have produced a thoroughly useful overview of modern Italian history, structured around different conceptions of modernity that are likely to remain controversial in the future. Their book will be invaluable for students and specialists in Italian history and culture, together with specialists in development who may want to look at Italy in broader comparative studies. They show beyond doubt that we all have a great deal to gain from properly multidisciplinary perspectives.” (Bruce Haddock, Journal of Modern Italian Studies, Vol. 22 (5), November, 2017)
“This wide-ranging volume offers a broad analysis of how competing ideologies within modern Italy ‘formulated multiple and often antagonistic visions of modernity’ … a valuable addition to modern Italian political history, and, given the breadth of its coverage, has particular potential to be used as a set text for undergraduate courses on Italian politics and political thinking.” (Selena Daly, Modern Italy, Vol. 23 (01), September, 2017)

“Forlenza and Thomassen have recounted the main themes running through modern Italian history from post-unification to the present, summarizing admirably the most important intellectual debates, and showing how every current of thinkers effectively created an original tradition of thought, at once specifically Italian and modern. … Forlenza and Thomassen’s study is an important contribution, which will be of immense benefit to both historians and social and political analysts of modern and contemporary Italy.” (Enrico Dal Lago, European History Quarterly, Vol. 47 (4), 2017)