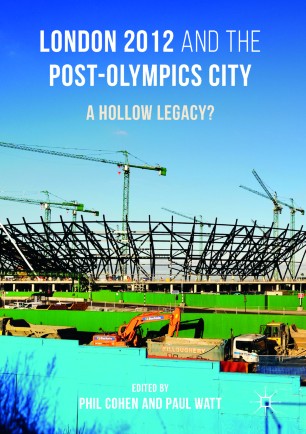 London 2012 and the Post-Olympics City

This book brings together a body of new research which looks both backwards and forwards to consider how far the London 2012 Olympic legacy has been delivered and how far it has been a hollow promise. Cohen and Watt consider the lessons that can be learnt from the London experience and aptly apply them other host cities, specifically Rio 2016 and Tokyo 2020. The Olympics are often described as a ‘mega-event’ in a way that assumes the host cities have no other existence outside, before or beyond the contexts imposed by the Games themselves. In terms of regeneration, the London 2012 Olympics promised to trigger a mega-regeneration project that was different to what had come before. This time the mistakes of other large-scale projects like London Docklands and Canary Wharf would be put right: top-down planning would be replaced by civic participation, communication and ‘the local’. This edited collection questions how far the 2012 London legacy really is different. In so doing, it brings fresh evidence, original insights and new perspectives to bear on the post-Olympics debate. A detailed and well-researched study, this book will be of great interest to scholars of urban geography, sociology, urban planning, and sports studies.

“London 2012 is full of important information and critical analysis with plenty of ideas for future work. Its bibliographies will be indispensable for students and researchers. The book will be of great value to planners, sociologists, urban geographers and all with a deep concern for London and for ‘Post-Olympic Studies’.” (Hugh Clout, Cercles, cercles.com, 2017)